Star Plus’ viewership in Week 19, which is double of Colors and triple of Zee TV, was possible due to the combination of three gods — Ram (Ramayan), Krishna (Mahabharat of 2013) and Shiv (Mahadev). These three shows contribute 70% to the channel’s total viewership. The industry is curious to know why things are working only for one channel while nothing seems to work for its competitors 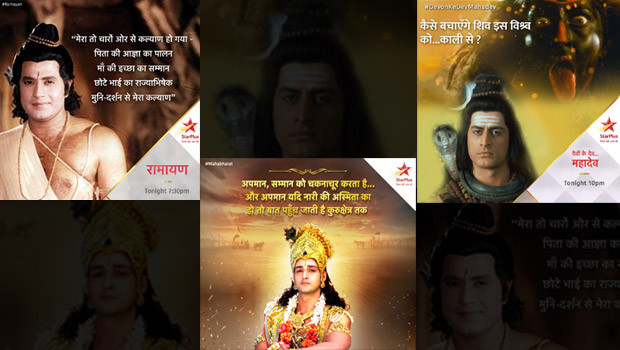 Picture this: The viewership of Star Plus is more than double that of Colors and about more than triple of Zee TV. And it took just about four weeks for Star Plus to create this huge and unbelievable “social distancing” from its fierce competitors.

Now, look at the helplessness of the competitors. They are literally left with “no option”. The best they can do is to wait for either production reboot or for some combination to click for them. The million-dollar question the industry is asking is why things are working only for one channel while no combination seems to work for its competitors?

The viewership pattern of entertainment channels during the nationwide lockdown has thrown up many surprises so far. It is evident that only mythology and comedy is working, but for not everyone.

First, Ramanand Sagar’s Ramayan worked for Doordarshan and BR Chopra’s Mahabharat for DD Bharti. And now Star Plus’ own Mahabharat, which first aired in 2013, and Devon Ke Dev - Mahadev are making strides.

Coming back to Star Plus, let us take a look at the viewership growth trajectory during the lockdown till Week 19. It grew three times from Week 14 to Week 19.

This miracle was possible due to the combination of the three most powerful gods Ram (Ramayan), Krishna (Mahabharat of 2013) and Shiv (Mahadev). These three shows contributed 70% of the channel’s viewership in Week 19.

Ramayan's success on DD had nostalgia attached to it, which helped break all viewership records. In its final week, Uttar Ramayan recorded an average viewership of 68 million Impressions.

But Ramayan did not repeat a similar success in its second airing on Star Plus but garnered about three times more viewership than BR Chopra’s Mahabharat on Colors. Both shows started airing on Monday, May 4.

BR Chopra’s Mahabharat is continuing to air on DD Bharti and it has reached its peak where the average viewership of the show is at 23 million as compared to 2.5 million on Colors in Week 19.

Colors had brought its popular show Krishna back before it acquired the rights of BR Chopra’s Mahabharat. On the other hand, Zee TV tried too many combinations, including OTT shows from Zee5 and AltBalaji, which could not impress viewers.

Although advertising has almost disappeared from Hindi general entertainment channels, it will be interesting to see how much edge Star Plus has with this viewership growth.

Tags: Star Plus lockdown blues
Advertisment
More from this section