When fake news started circulating online regarding newspapers being potential carriers of coronavirus, the industry responded by calling social media a disseminator of fake news. The entire newspaper fraternity got together and issued joint advertisements, saying print is the only trusted source of news

During the ongoing economic downturn and increasingly tough conditions for reporting, India’s print industry is currently suffering another headache—fake news.

The industry, which has always been a most trusted source of news, is battling unfound rumours circulating on social media claiming that newspapers could be the potential carriers of the coronavirus.

The fake news has spread so widely through WhatsApp and other mediums that readers in some areas have become apprehensive of touching newspapers.

Last week, Raj Jain, the CEO of Times of India Group, had to counter these rumours in a mail to employees. In his mail to all Times Group employees, Jain called out the fake news being circulated and assured them there was no risk of newspapers being carriers of the disease.

Jain said, “The newspaper printing, folding and bundling are all done without touch. The bundles are then loaded on to fumigated trucks by gloved and face-masked handlers. Keeping the current state in mind, at the depot, we have encouraged a strict hygiene discipline among the delivery boys.”

HT Media group too said it is sanitising all its plants regularly.

“All the plants are being sanitised and attempts are being made to avoid manual intervention,” said Rajan Bhalla, Chief Business Officer and Chief Marketing Officer, HT Media.

HT Media group is ensuring its vendors are also safe. “Vendors at all the places are being discouraged from allowing delivery boys who are unwell to operate and are being equipped with sanitisers,” he added.

Dainik Bhaskar too shared many videos showing sanitising the newspapers at the print facility and vendors. 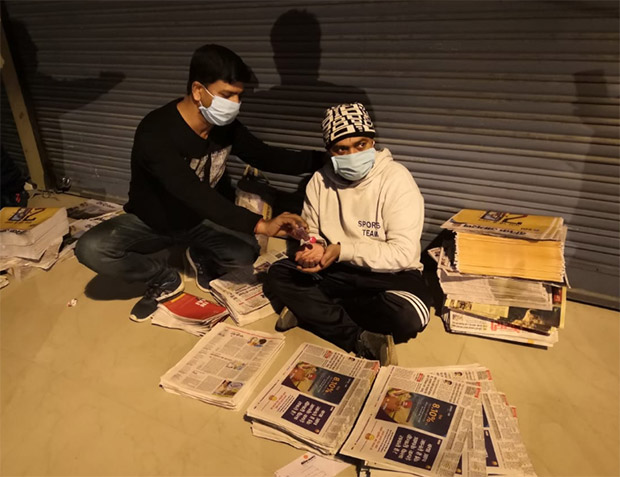 “Neither WHO nor India’s Health Ministry has issued any report in any of its recommendations or advisories to restrict newspapers and milk packets as a step towards prevention/spread of the disease. There are enough eminent doctors, including leading virologists, who have categorically stated that the newspaper carries no risk of carrying the infection,” said Jain of Times Group.

The authority on global pandemic WHO says, “Goods and packages delivered to you won’t make you sick. The likelihood of an infected person contaminating commercial goods is low and the risk of catching the virus from a package that has been moved, travelled and exposed to different conditions and temperature is also low.”

This is true for groceries, veggies, newspapers and milk delivered at your doorstep, HT communicated its consumers.

“At this crucial time, please continue taking precautions, and stay away from fake news,” the publication said.

All the major newspapers across the country published a front-page ad attacking social media as the carrier of fake news, and establishing print media as an authentic source of news in these uncertain times. The copy of the ad read:

“Covid-19 has shown us that fake news is a real issue. It seems fake news on social media is spreading faster than the virus itself. And answers are harder than ever to come by. Now we aren’t medical experts, but we know how to get to the truth. By thoroughly researching and verifying every word before it’s actually printed. So in these uncertain times, might we ask you wait. Wait before you share something you have no way of confirming. Wait until the truth in print makes its way to your doorstep. Print is proof.”

The message communicated through the ad by newspaper publishers was doing rounds across social media platforms. However, it was not clear if the ad was targeted at only the existing readers of the newspapers or there was a sufficient digital push except using the social media handles of the publications supporting the campaign.

It is evident that when print was targeted by fake news on social media, it gave back by calling out social media as a carrier of fake news and established its credentials of a trusted source of news.