FMCG for all India grew at 7.3% across general trade, modern trade and E-Commerce for Q4 2019 - marginally lower than growth in the last quarter (7.9% in Q3 2019). NielsenŌĆÖs eighth edition of┬Ā the Quarterly FMCG Snapshot, released for Q4 2019 (months of October, November and December) also indicates that the slowdown is showing signs of steadying from a quarter on quarter view. For the full year 2019 - value growth was at 9.2% (9.7% with E-Commerce) as against 13.5% in 2018.

ŌĆ£2019 has been a tough year for the FMCG Industry with over four point decline, but we do see it stabilising in the last quarter of the year. A mix of macro economic factors, and channel and zone factors driven by manufacturers, coupled with consolidation of smaller players have been instrumental in the slowdown. A lower pace of innovation has further limited consumer demand pick up. However, 2020 offers a stable outlook for the industry arresting the 2019 decline,ŌĆØ said Prasun Basu, South Asia Zone President, Nielsen Global Connect.

Sharang Pant,Lead,┬Ā RMS and Retail Vertical, Nielsen South Asia, said, ŌĆ£While macro factors are still not conducive, FMCG growth in the last quarter of 2019 seems to be stabilizing. This comes from the festive uptick in MT and E-commerce channels. Excessive and untimely rains have impacted growth in the West Zone.ŌĆØ

ŌĆ£Like we had anticipated, we are starting to see early signs of stability with the slowdown being arrested. The macroeconomic policies coupled with inflation/GDP trajectory, manufacturer actions and consumer sentiment is expected to lead to money in the hands of consumers, thereby fueling consumption. Our forecasts for Q1'20 is 8-9% and for the full year 2020 is 9-10%, similar to the year gone by,ŌĆØ said Nitya Bhalla, Lead, Data Science, Nielsen South Asia.

The last quarter of 2019 saw the FMCG industry grow at 6.6% (7.3% with Ecommerce), indicating an arrest as against the sharp slowdown witnessed in the previous quarters.The same period year ago was a high double digit (15.7% in Q4 2018).

This stress in industry growth is also witnessed in the Macro-Economics environment with:

ŌŚÅ┬Ā Spurt in job losses/rising unemployment leading to the general acceptance of the downturn. 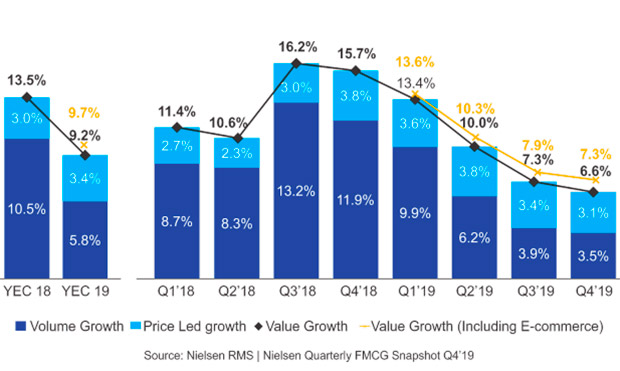 This quarter┬Ā organised retail continued its rise with both Modern Trade (15% growth in Q4 2019) and E-Commerce channels (53% in Q4 2019) inching up on account of affordable pricing and festive pickup. 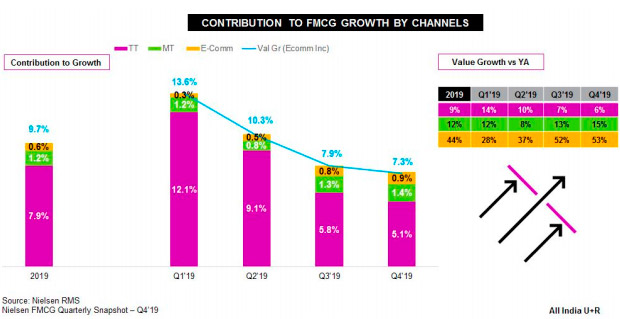 Growth witnessed in Modern Trade is based on both distribution expansion as well as same store throughput growth; while E-Commerce is an emerging channel and witnessing high growth through increase in adoption by consumers as well as Manufacturers

Traditional Trade, the highest contributing channel to FMCG with 90% contribution witnessed significantly slower growth Q4ŌĆÖ19 (5.7% vs 16% in Q4ŌĆÖ18). This drop is led by shrinkage of consumption indicated by a 10 percentage points drop in volume growth (from 12% in Q4ŌĆÖ18 to 2.6% in Q4ŌĆÖ19).

Rural is stable at low growth levels, while urban continues to decelerate

Traditionally, Rural India nearly three fourths of IndiaŌĆÖs population and contributes to 36% to overall FMCG spends, historically grown around 3-5% points faster vs. urban. However, in the last quarter Rural growth dropped below Urban for the first time in 7 years.

In the last quarter of 2019, the North, East and South maintain stable growth against the previous period. However, the West Zone showed a decline.

The West zone had a 4.6% value growth (down from 15% in Q4ŌĆÖ18 and 6.3% in Q3ŌĆÖ19). The slowdown in the zone was led by shrinkage in volume growth which has become almost flat at 1.1% in Q4ŌĆÖ19 (11% in Q4ŌĆÖ18). The Urban market and General Trade are the key drivers of the slowdown in the West, while Modern Trade continues to grow.

After┬Ā two years of double digit┬Ā growth, FMCG growth slowed down to single digit in 2019. In the calendar year 2019, FMCG witnessed 9.2% growth (excluding┬Ā E-Commerce) down from a 13.5% in the previous calendar year. The growth trend was dampened by drop in volume growth (down to 5.8% from 10.5% in 2018) while price led growth is sustained at 3.4%.

- Comparing zones over the one year period while North and West were most affected, South sustained its growth levels. There were diverging trends at play - with the┬Ā North contributing 30%; West 24% and South 25%┬Ā to the overall FMCG basket.

- 45% of the slowdown is led by small players ( <100 crs) driven by fewer new manufacturers entering FMCG space, while the existing decline in distribution and significant slowdown in Innovation.

.Outlook for 2020 (Including E-Commerce)

The key factors influencing the trajectory so far and the forecast for the future include:

Inflation in DecŌĆś19 reached a 5 year high at 7.3%. That said the trajectory would be on a declining trend, and┬Ā is┬Ā expected┬Ā to┬Ā end┬Ā in┬Ā the┬Ā 4-5┬Ā range┬Ā for┬Ā this┬Ā year.┬Ā Additionally┬Ā rural┬Ā inflation┬Ā has touched, and is at similar levels with urban inflation on account of rising food prices. With food inflation for All India at 14.1% the inflation upsurge is driven by rise in prices for essentials such as vegetables, pulses, meat and fish and eggs. While inflation is at an all-time high, the silver lining in the cloud is that if vegetables are excluded, CPI inflation is 4.1%. With new crops coming in and onions supply stabilising inflation is expected to go down in coming months.

Government Policies & Budget provisions: With the corporate tax cut from 30% to 22%, the GST collections┬Ā have┬Ā reduced and there is an increased possibility of the government breaching its

3.3% fiscal deficit target and may impact the degree of spending. Currently, continuing efforts to boost consumption and growth government has announced a 15 Bn USD infrastructure pipeline for the next 5 years. With the 3rd and final tranche for the year of the Pradhan Mantri Kisan Yojna being released, 1.7 bn USD is expected to flow into the economy. Improvement in┬Ā IndiaŌĆÖs global ranking in ŌĆśEase of Doing BusinessŌĆÖ from 77 to 63, coupled with proposals to allow greater FDI in select sectors may lead to higher amounts of investments coming into the country. Budget 2020 is also expected to bring respite to the masses through tax cuts and additional benefits and may be a reason for cheer.

- Telecom sector will have an overhang on the larger growth picture

- With BSVI norms coming into effect in 2020, the auto sector may start seeing greater stability.

- Exchange rate to be stable and high at around 70 Rs per dollar.

#CoronavirusOutbreak: Why it is important for non-essential brands to be on top of consumersŌĆÖ minds