Launching Republic Bharat with a ‘big bang’, Goswami expects to expand the Hindi news genre’s viewership and says both viewers and advertisers will respond appropriately to the new channel. In an interview with BestMediaInfo.com, the face of Republic TV reveals his plans for the network and his ambition of becoming a global content broadcasting player 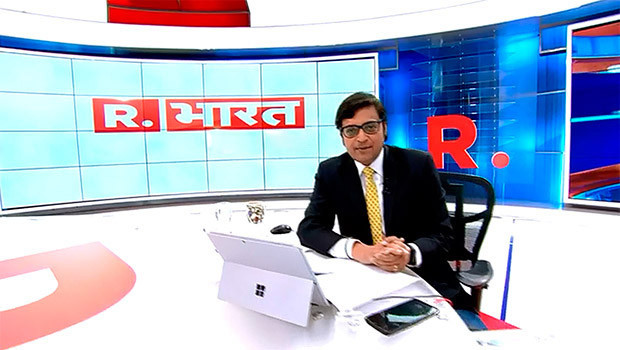 Never in the history of news broadcasting has it happened that dozens of advertisers have lined up to sign deals even before a channel is launched. Arnab Goswami, India’s most popular TV news face who evokes mixed reactions for his loud style of debating, has been able to do that — get both advertisers and viewers excited with the launch of his Hindi news channel, Republic Bharat.

Bharat, a free-to-air channel, solely rests on the shoulders of Goswami, who has proved his mettle in news broadcasting by making Republic the number one English TV news channel since its launch.

In an interview with BestMediaInfo.com, Goswami says he wants to do the same with the Hindi news genre and his ambition is to take the Republic brand global. His English channel is known for taking political positions and Goswami himself is seen more inclined towards the present day government.

Speaking about the channel's pre-election launch strategy, Goswami says he’s going to cash in on the viewership spike generated because of elections. The channel has already launched outdoor, TV, radio and multimedia campaigns, focusing on 55 tier one and tier two cities.

Asked why viewers would watch Republic Bharat, he said, “We are going to bring back the focus on news in Hindi. I am horrified with the trends in Hindi news; it is going down every day. Some of those who call themselves leading channels are doing snake and ladder journalism.”

Talking about the channel’s TG and the revenue pie it is targeting, he said, “The channel is targeting 150 million viewers. We are targeting a significant revenue pie as we’ll be expanding the viewership of Hindi TV news.”

The Hindi market is already cluttered. What kind of opportunity do you see there? What's your vision for R. Bharat?

There are a lot of channels in Hindi but for the last 15 years, not even one channel has broken an exclusive story. Not even one channel has done a public campaign or has been identified with breaking news. All the big stories have been broken by me and my team. My team, which has worked with me for 15 years and more, has convinced me and are pushing me to do Hindi. So, it is because of my team that I am doing Hindi and I am convinced that we will change the way news is done in Hindi.

You have taken strong editorial positions. Republic is also known for taking strong positions and at times political sides as well. Will Bharat be the same?

Hindi audiences also watch English and these audiences have given up on Hindi news channels for the last five to seven years. To get the news, they are watching Republic English. The audience has also asked us to launch us a full-fledged Hindi channel, so now they will love us as much in Hindi. The positions we take, we take them because we don't want to just do news. We see ourselves as the reasons for changing a new India. We take a position for the simple fact that we love the new, we are straightforward, we have got nothing to hide and we are proud about what we do.

What's going to be the primary TG of Bharat? Most Hindi news channels appeal to the Hindi Hinterland. Will you cater to the same market?

Distribution will play a major role in your success. It is even more important today when the new tariff regime is coming into play.

We are a 100% FTA channel similar to Republic. Hence, it will be a very attractive option at a time when there is a fair amount of flux in the market because of the FTA regime. We have received a lot of interest from advertisers as we are a free-to-air channel with wide distribution. So, without doubt, we have an advantage over other pay channels such as AajTak.

What's going to be your strategy to ensure Bharat finds a spot among the 100 FTA channels?

People are already demanding that Bharat should be there and even our partners in the distribution business, including the supporting distribution companies across the country, have been welcoming us. Wherever I have travelled, be it Delhi, Punjab, Gujarat and other parts of India, I have been told by everyone that they are waiting for Republic Bharat because they want a channel with which they can identify. We want to have a channel that we will feel proud of. So, the differentiation is really in the content because people like our content and quality of production. It is our biggest differentiation. FTA channels are purely content-based, so if you get good content then people will want you.

Do you have any launch deals with the advertisers? And what kind of advertisers is the channel targeting?

There has been a tremendous response. Same as we had for Republic TV’s English channel where we had launched with all the marquee advertisers. I think all the marquee advertisers in Hindi will be on board with us from day one. My team, including Vikas Khanchandani, Bhaskar Das and Harsh Bhandari, who is in charge of Hindi sales, are doing a terrific job and I am proud of what they have done. The kind of support we have from all the leading advertisers in the Hindi news genre, including advertisers entering the Hindi news channel, see the level of excitement and this is because we are known to disrupt and expand the genre. In English, we expanded the genre by 72% with our launch. If we can achieve something similar with Bharat or even half of that, then there is enough reason to get commercial support. I am grateful for that support and I am grateful for all the advertisers, even those whom I haven't got an opportunity to individually thank. I would like to thank them through this interview for helping me launch this channel.

What kind of advantage does the pre-election launch give you?

People watch news more during pre-election so that is one advantage. Secondly, people watch channels with credibility before elections. Now, the channels that are doing snake and ladder journalism won't be taken seriously. With Republic English, we have seen a spike in viewership before an election. Whether it is Gujarat or Karnataka elections, our viewership increases a lot and I feel the same trend will continue for Hindi.

What kind of programming are you looking at for the Hindi channel? Will it be the same debated-based format like your English channel?

The programming will be all about news; we are a news channel and we will be concentrating on news. The fact of the matter is that I won't be doing snake and ladder journalism like other Hindi news channels. These Hindi news channels have all done snake and ladder and superstitious journalism with fiction stories. Unfortunately, some of these Hindi channels are also showing vulgar dance videos. I am horrified with the trends in Hindi news; it is going down every day. Some of the channels who call themselves leading channels have half-hour shows with YouTube videos of dancers featuring lewd and vulgar performances. On the other hand, Republic Bharat is going to do news. And by concentrating on news, we will be No.1.

You are going to be the most important factor that will determine the success of the Hindi channel. Will the Arnab factor be able to replicate the success of English in Hindi?

I think I will get the love and support from the Hindi-speaking audiences and I think Republic Bharat will also enjoy their support. As I said yesterday, when you work with all your passion and love then people are on your side, God is on your side and viewers are on your side. So, I am hopeful that I will get as much love. I have already got the support ever since I have announced the launch of Bharat. I am receiving calls, SMS, e-mails and videos. We have received 1000s of videos where people are telling us ‘Aab Hindi Hojaye’. So, the entry of Republic in Hindi has become a huge talking point and I think there is a lot of virality to it. So, I am 100% confident that I will get love and support of the Hindi viewers.

Will you be steering the Hindi channel as well or will there be known faces from Hindi TV journalism or a mix of both?

We have on-board several known leading names from Hindi TV journalism of the country. We have today built a team of 14 to 15 top notch anchors who have joined us. We have also unleashed a campaign, which would feature our advertisers. It is 50 to 55 cities campaign with 500 hoardings. We have a maximum digital push happening. We will advertise across the Star TV network and will also use Radio City. So, on all fronts, we are planning to give a massive push to brand-building efforts.

Will there be synergy between the Hindi and the English channels?

There will be synergy. I am blessed to have a very strong editorial and distribution team in English. I am blessed to have a very strong commercial and sales team. I have a very strong senior management. So the synergy will be there and when we announced that Vikas will be CEO and Bhaskar Das will come as group president. It was evident that on the group perspective, we are beginning our synergies. I am also happy to say that from distribution perspective, Priya Mukherjee, who is our president of distribution as well as international distribution, will lead the effort across both the channels. I also feel that in the future, I want my leaders to grow with us and therefore the senior leadership, the senior editorial team and the senior production team will all be synergised across both the platforms.

What kind of a viewership and revenue pie are you targeting?

We hope to be significant player in Hindi news and with that we hope to get a significant part of the revenue pie. We also hope to be expanding the Hindi news genre with our substantial reach. We have made major investments in ensuring depth on distribution from day one and hence we are making a dramatic and strong entry into the Hindi news genre. We are not waiting for growth over a long period of time; we are coming with a big bang and therefore the market will respond appropriately.

By the end of this year, I will expand into the global content creation and curation business. I have been busy for the last three months with Hindi and in the middle of this month I will expand our digital business domestically and by November and December, I will announce the entry in the global market.