Durex has announced its entry into flavoured condom market and launched a full-fledged campaign, #GoPlaces, to promote it

The Indian advertising industry has come a long way and we have seen the winds of change in most of our ads. From breaking stereotypes around a certain role for men and women to creating more of purpose-driven campaigns, advertising has the power to change the mindset of people.

But when it comes to certain categories, there is still a long road ahead to travel. One of them is the condom category. Condom campaigns mostly objectify women while it is of equal importance for men and women. Even if the law bans sexually explicit ads on TV, a lot of brands still objectify women through their approach to the storyline.

Understanding that the onus of change lies with the brands, Reckitt Benckiser brand Durex has made sure it doesnāt make the same mistake of objectifying women in ads like most of condom brands do and give equal importance to both the sexes in its marketing campaigns.

Shedding some light on this philosophy, Pankaj Duhan, Chief Marketing Officer, RB Health South Asia, said, āThe campaigns in the category significantly objectify women but it is something that Durex doesnāt believe in. We treat men and women equally and sex is a fundamental thing for both the sexes. Therefore, communication shouldnāt be restricted to the one or the other. It is not just a manās right to fantasise for themselves. We are developing and portraying content that talks about womenās fantasies and how they can be brought to life.ā

Durex has launched its first flavoured condoms ā bubble gum, wildberry and vanilla popsicle ā in the market. And to promote their launch, the brand and its creative agency Havas Worldwide India has created a campaign, #GoPlaces.

The brand has made sure it is driving a two-way communication between consumers and itself through a lot of digital content than just taking the regular and traditional advertising route. Also, because the brand aims to penetrate the tier II and III market with the launch, it has not left any stone unturned and created a 360-degree strategy with a full-fledged campaign, including a TVC, outdoor, radio and print as well.

The campaign started with the brand posting one of the findings of the Durex Sex Survey, which stated 74% of Indians want to try something new in bed. People want to experiment and try something new. 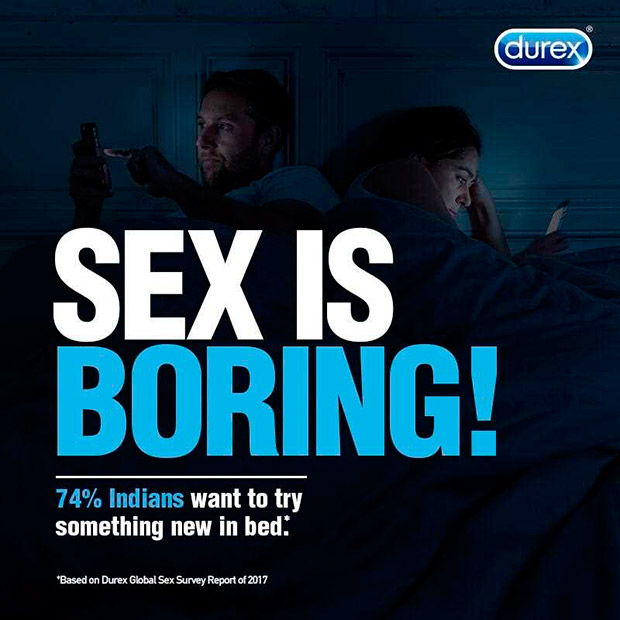 After this survey, the brand created a lot of buzz on social media with influencers from across the genres, including both men and women to talk about how sex shouldnāt be boring with the hashtag #WhySoBoring.

Okay whatās going on? Sex is apparently boring now.
I think I fall in the 24% that feels that the art of making love isn't boring and hence you gotta help me understand these numbers stated by @DurexIndia !

Comment below with what you think makes sex boring with #WhySoBoring! pic.twitter.com/VZFjpwFKs8

Durex also created a small 17 minutes 20 seconds live chat show with celebrity hosts Anusha Dandekar and Karan Kundra to talk about how to make sex interesting. Both welcomed other celebrities on the show who shared their experiences of making sex interesting. In the live show, questions and comments from consumers were also welcomed.

Real-life couple @Divyakitweet and @VSood12 got talking about their fantasies! The world of fantasy is too big and it has a place for each one of you. And guess what, you can now live them up and #GoPlaces with our new flavoured condoms. pic.twitter.com/YOJMekcRkN

The brand also brought on board fashion blogger Dolly Singh as Zeenat Baji who shared her fantasy about sex in a video.

It can really get like that for @spill_the_sass too! Hear her talk about how sex can get boring after a few days and how she is counting on our new āBubblegumā flavour to live her fantasy! So, how do you fantasize to āUn-bore in bedā? Write us in the comments below! #GoPlaces pic.twitter.com/oEJmbtGmWy

A look at the business objective of the launch

Even after a meagre penetration of less than 5%, the condom market is valued around Rs 15,000 crore in India, indicating a huge scope of growth for brands in the category. While 65% of the category functions in the flavoured variants of condoms, Reckitt Benckiser brand, which has variants like Durex Air and Mutual Climax, didnāt have meaningful hold in the flavoured segment until now. The brand finally entered the flavoured condom market with bubble gum, wildberry and vanilla popsicle flavours. 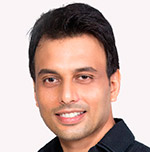 Commenting on the launch, Duhan said, āDurex is the thought leader in sexual well-being category in India and has doubled its business over the last couple of years with close to 50% growth in the last two years. This entry will allow us to participate and drive the flavoured segment, which we were not being able to do previously. The flavours that we have launched are not the #MeToo flavours, but very distinguished ones and never seen in the category.ā

RB had earlier launched flavours under Durex-owned condom brand Kohinoor with flavours such as Meetha Pan, Kaala Khatta, Silky Chocolate and Juicy Strawberry. But this launch will mark the parent company of Kohinoor, Durex, entering into the flavoured condom market.

Explaining the rationale behind the pricing strategy, Duhan said, āDurex has been doing fantastic in the metros, but our distribution gets limited because our pricing is quite high. Therefore, we are launching flavours to widen our access and ability of people to be able to afford Durex. This move will make the brand significantly bigger and stronger while being accessible to the consumers through its pricing strategy and the increasing demand for flavoured condoms in the market.ā

He said, āOur efforts have always been to broaden the brandās appeal by going across different benefit and price segments. Earlier in the year, the brand extended its pricing segment vertically upwards with Mutual Climax. Along with the launch of Mutual Climax, we wanted to broaden the consumer segment by talking to men and women both in the communication. At the same time, we also planned to make the appeal of the brand vertically downwards.ā

Duhan concluded, āDurex holds a strong position in the metros and with the launch of the flavoured condom, the brand expects to accelerate the business from what it has done before. The product price will make it more accessible and increase reach significantly.ā

United Breweriesā adspend up 20% in 2020, to focus on TV and digital

Commentary: Ekam stuck ā is ISA hand in glove with Google and Nielsen?