Titled ‘Ted Talks India: Nayi Baat’, the upcoming season will feature 26 speakers from different walks of life. It will be hosted by Shah Rukh Khan and telecasted every weekend from November 2 at 9.30 pm 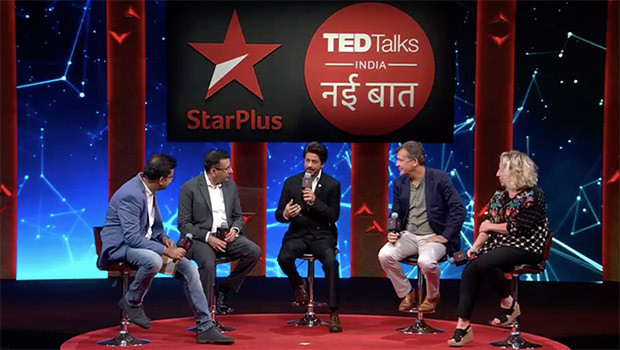 After the immense success of the first edition of ‘TED Talks India: Nayi Baat’, Star Plus has decided to expand its footprints to English and regional markets in the second season. Bollywood superstar Shah Rukh Khan will once again host the show that will premiere on November 2.

Created in collaboration with TED, the show is set to be filmed simultaneously in English and Hindi, and will also be dubbed in Tamil, Telugu and Bengali. The upcoming season will feature 26 speakers from different walks of life and will be telecasted every weekend at 9.30 pm.

While the show will be simulcasted in English on Star World, the network has taken an interesting approach for regional language feeds. Instead of airing Tamil, Bangla and Telugu feeds on the respective language GECs, the network will telecast the show on Nat Geo.

When asked about the network’s strategy to choose an infotainment channel over its regional GECs - Star Vijay, Star Maa and Star Jalsha - Gaurav Banerjee, President and Head, Hindi GEC, Star India, said, “I think the crux of this show is that we are creating it in Hindi. It is essentially about Star Plus which stands for ‘Rishta Wohi Baat Nayi’. That is what it envisages and this show takes that idea forward. So, it is a Star Plus show, which we are putting in other languages because we want to expand the footprint. However, we expect a large part of viewership to take place through Star Plus and Hotstar.”

Sanjay Gupta, Country Manager, Star and Disney India, said, “The opportunity I see with Hotstar is that a lot of young audiences today use digital media. So, it gives us the opportunity to reach to every Indian.”

“There are towns and cities in India where people don’t have TV but they have mobile phones and data connection. They are consuming content through mobile phones. So, I think it boosts our ability to reach out to almost every Indian in this country given that there are a huge number of mobile screens; there are around 20 crore TV screens whereas 40 crore mobile screens on which people are watching the content. Now, we can take inspiring stories to each one of them even though they don't have TV screens at home,” he added.

While last season was all about creating its base in the Indian market and attracting consumer, this year, the network is focusing on implementing all the learning from the previous season. This time, seven episodes will be aired in a month time.

According to Juliet Blake, head of Television for TED Talks, people delivering Ted Talks are excellent storytellers. This time, the way they present themselves is slightly different than the previous season.

“We have introduced a lot more visual content into the programme from short film to animation. We have never done it before on TED Talks; we never did it in our main conference. So, visual content will attract audience in a different way,” Blake said.

The first season of TED Talks was a great success as it was the first time that the idea was taken from the conference and aired on TV. However, the challenge was that for the first time TED Talks was happening in Hindi. This time the focus is entirely on people who never faced camera or enjoyed being in the spotlight, yet they are change-makers and ambitious people. Hence, the network believes that this platform can be a great accelerator for their ideas to become bigger and reach newer audience.

While the first season managed to attract audience from all walks of life, it was due to the younger generation that TED Talks gained popularity in India.

Speaking about the viewership for the show which may or may not work in today’s ecosystem and what does it mean for Star Plus’ programming, Banerjee said, “Viewership is really important as it tell us the engagement we are getting and how valuable we are to the consumers. On the other hand, we also want to be attractive to family audiences; we want to be innovative and want people to think that we are trying to experiment and do something different.”

Tags: Star Plus TED Talk
Advertisment
More from this section