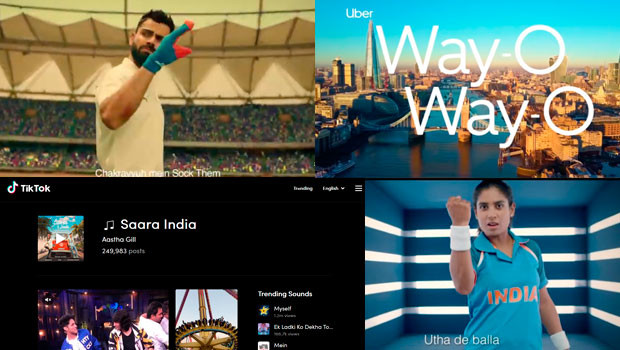 There was a time when pop songs were a rage in the country. With songs like Gur Naalo Ishq Mitha starring the much drooled over Jas Arora, Baba Sehgal’s Thanda Thanda Paani, Shamur’s Let The Music Play and so on and so forth - the Indipop genre had taken the country by storm. Now it’s the era of anthems - by brands. With anthems being created for the recent elections which took place to the most recent - the currently running ICC World Cup cricket match, brands are finding different ways to engage with the consumer.

Brands like PUMA, Uber, American Tourister and TikTok have created anthems, cheering the men in blue at the ICC Cricket World Cup 2019. But the question is - which brand will win this game of anthems?

The Sock Them campaign takes inspiration from the skipper’s iconic moment at the Sydney Cricket Ground, where he made a statement by gesturing that he ‘Lets his bat do the talking’. Sock Them is a platform that aims to give Indian cricket fans all the ammunition they need to support the men in blue, with a rap anthem and a symbolic gesture.

The Sock Them anthem, ‘Chakravyuh Mein Sock Them’, also has other PUMA brand ambassadors like Sushma Verma, Indian national woman cricketer, and Mary Kom, Indian Olympic boxer, express their support for the team.

The Sock Them anthem was officially launched on May 31, 2019 at a special preview in Khar Social, Mumbai. This event saw the best hip hop crews in the city take on the #SockThem challenge and compete in a dance-off. The evening culminated with Divine taking over the stage for his first public performance of the anthem.

PUMA will allocate 90% of the overall marketing budget in the digital space, for this campaign.

Uber, the personal mobility company, also launched a campaign, ‘This World Cup, Every Fan Wins’ on the sidelines of the cricket tournament which kicked off on May 30, 2019.

Uber went live with Way-O, Way-O, an anthem to energise fans and viewers of one of the world’s most anticipated sports events. Way-O, Way-O, Uber’s signature anthem, exemplifies the excitement of cricket lovers by giving them one unified voice to spread cheer and bring fans closer together for the game they love.

Both the campaign and the anthem have been put in place by Sonal Dabral, Chief Creative Officer, South and South East Asia and Vice-Chairman India of Ogilvy. The rhythmic anthem is a cultural blend of harmonies, written by Dabral and composed, produced and curated by Michael (Mikey) McCleary.

The song will be played on stadium screens during game breaks through the tournament.The campaign is an integrated one, covering not just riders but also driver partners across all touch points. Apart from being run in India, it is being extended to England, Australia, South Africa, Pakistan and Bangladesh.

As a part of the campaign, Uber has planned some exciting and creative elements/activations to keep its eaters, riders and partners engaged throughout the World Cup.

The demand generation campaign is for Uber’s consumers as well as partners that provide passionate fans (riders, eaters, driver and courier partners) a chance to win merchandise as well as a once-in-a-lifetime opportunity to win a trip to the World Cup and experience the thrill of a live game. It is a unified campaign across Uber Eats and Uber Rides wherein every trip you take on Uber, or every order with Eats you score runs, will keep totalling up to make you eligible to earn tickets to the World Cup.

TikTok, the world’s leading short-video platform, recently announced its partnership with The International Cricket Council (ICC) as part of a global partnership with ByteDance. The partnership focuses on delivering exciting campaigns and unique content at the ICC Men’s Cricket World Cup 2019 through TikTok.

In the spirit of celebrating the festival of Cricket World Cup in India, TikTok, in collaboration with global music giant Sony Music’s artist Aastha Gill also launched a TikTok World Cup anthem titled ‘Jeetega Saara India’. This exciting new anthem cheers on Team India to get the World Cup home and is exclusively available on TikTok.

As a part of the partnership, TikTok, launched its #CricketWorldCup in-app challenge to give five lucky cricket lovers a chance to watch India’s match live in England.To encourage users pan-India to create engaging content to celebrate the spirit of World Cup, TikTok has also introduced an array of exciting in-app features, including a special sticker to celebrate the tournament.

ICC’s official TikTok account gives TikTok users an insight into how the players from across the world are gearing up for the upcoming matches and captures some of the fun moments from their daily lives. TikTok plans to launch another in-app campaign when India enters the finals to support the Indian team to get the World Cup home.

American Tourister, the affordable luggage brand from Samsonite, has always believed in the power of sport as a unifier, bringing together people from every walk of life in common cause.

With this sentiment in mind, American Tourister has extended its ongoing #YourAccessToTheWorld campaign, spearheaded by cricketing icon and captain of Team India ViratKohli.

To further cheer on Team India, American Tourister has crafted an anthem ahead of this momentous occasion. Across social media platforms, American Tourister has engaged with fans nationwide and asked them to send in their cheers, messages, well wishes for the boys in blue. The community’s input has subsequently been used to create a crowdsourced anthem. Led by cricketing maestro and captain of the Indian Women’s cricket team Mithali Raj, this musical composition truly captures the spirit of our united nation as we head onto the global stage.

In order to truly capture the depths of emotion around the upcoming tournament American Tourister has launched its exclusive Champions Edition luggage, whose unique design and features have been inspired by the gentleman's game. As a special bonus, two of the bags also feature Virat Kohli’s signature.

Seeking to connect with billions of diehard cricket fans to cheer for Team India during this edition of the ICC World Cup 2019 in England and Wales, the TVC features Indian cricket stars like Rohit Sharma, Shikhar Dhawan, Kedar Jadhav and Japrit Bumrah.

The Oppo app would help record the heartbeat/pulse of the person accessing it. The sound of the heartbeat of various people put together would then be formed into an anthem - which would be created by Meet Bros. This will further seek to increase fan engagement and elevate the excitement to the next level. Why this sudden trend of releasing anthems by brands? Jagdeep Kapoor, Chief Managing Director, Samsika Marketing Consultants believes that anthems are at a higher level than just jingles or TVCs. “They represent the brand’s personality at an enhanced level like a country or an organisations anthem. Hence the growing trend,” he revealed.

Competitive sports invoke a spirit of unity and belongingness be it football or cricket. “Anthems have the potential to leverage on the equity of a highly anticipated event like the Cricket World Cup. Brands seeking attention during this high pitch event, find anthems as a useful tool to drive relevance,” pointed out Saurabh Uboweja, International Brand Expert and CEO, Brands of Desire.

What leverage do brands get, while putting an anthem in place for their brand? “Brands are able to get two benefits - memorability and higher perceived value. This helps image enhancement and sharper focus,” brought out Kapoor.

Talking about the relevance of the digital medium Uboweja mentioned, “Digital today is not just an alternate medium. For several brands, it is now emerging as the dominant medium or the medium of first choice while creating and sharing content with their followers. Any integrated content or media strategy today would require digital to play a key role.”

Getting a video shot and arranging for singers for the anthem costs quite a bit. What kind of an ROI do brands receive with such anthems? “Since it is about narrowcasting, it is cost effective, with less wastage, greater recall and hence higher ROI,” told Kapoor.

“The cost of content development is still a fraction of media spend. Exceptional quality content ensures a multiplier ROI Impact on every rupee spent on media. It is prudent for brands to spend on quality of content, artists and high production standards to enjoy a higher ROI on media spend,” said Uboweja.