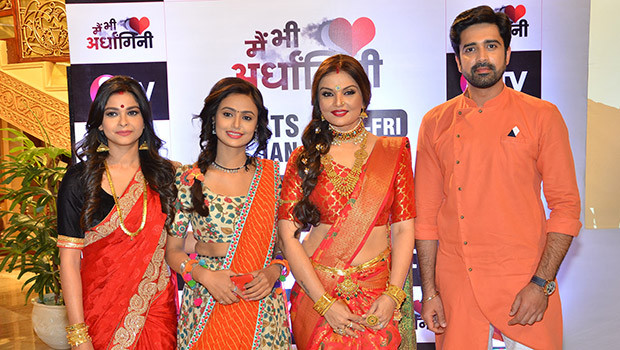 Bringing forth an exceptional story of a loyal bond and the strength of love, &TV is launching a brand-new fiction show Main Bhi Ardhangini. Premiering on January 21, 2019, the show will be telecast every Monday to Friday at 9.30 pm.

Produced by Essel Vision Productions, Main Bhi Ardhangini is a romantic drama of true love that lives beyond eternity and transcends even death. It showcases the power and strength that an Ardhangini has for her husband, and how she shields him from all evil even after her death. The show brings together an ensemble cast with popular television faces like Avinash Sachdev, Aditi Rawat, Anjali Priya and Deepshikha Nagpal amongst others.

To promote the show the star cast were in Jaipur and urged their fans and the channel’s fierce loyalists to subscribe to &TV and the Zee bouquet as per the new government rule starting February 1, 2019.

Speaking about the concept of the show, Vishnu Shankar, Head, &TV, said, “We are excited to kickstart the year with the launch of Main Bhi Ardhangini, an adaptation of the very popular Zee Tamil show Yaaradi Nee Mohini which has been successfully retold in many other languages. This romantic drama at primetime weekday explores a different perspective of love, commitment and true bond that a wife as an Ardhangini has for her husband. The saga, a complete package of emotions, brings alive on screen a warm narrative and relatable characters each trying to deal with life, loss and love.”

Talking about the show and its concept, Shariq Patel, CEO, Essel Vision Productions, said, “Romance as a genre is an all-time favourite with viewers. With Main Bhi Ardhangini we wish to portray the emotion of love and bond of a husband and wife in a different way, encompassing virtues like selflessness, devotion, loyalty, protection and care. With our unique style of storytelling, we are sure the essence of the subject will come through effectively and the audience will be intrigued to watch how both Vaidehi and Chitra, shield Madhav from evil. The story brings forward a unique relationship that is interwoven in a thread of love which surpasses even death.”