Armed with attractive offers on products, the e-commerce giant has launched its biggest-ever media campaign to push sales during the Big Billion Days sale from October 10. The campaign that's being rolled out across all mediums includes 200 TVCs, a dozen national and regional celebs and two million personalised videos 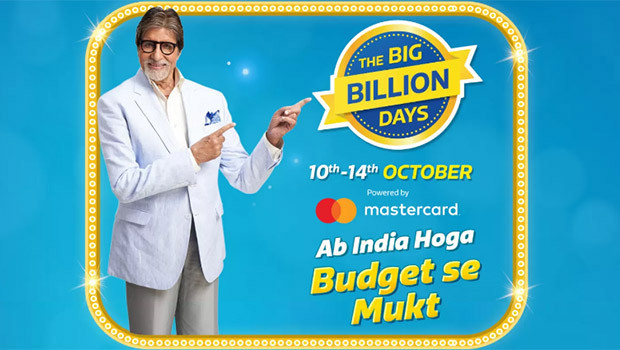 E-commerce giant Flipkart is going full throttle on its marketing campaign to ensure that sales during this week’s four-day Big Billion Days (BBD) festival are doubled as compared to last year.

The Walmart-owned e-commerce platform has readied its biggest media splash ever with 200 TVCs (some of them based on memes) with around a dozen national and regional celebrities, around two million personalised videos among several other market disruptions. The e-retailer hopes to rake in almost Rs 1 billion in GMV during the five-day sale that starts on October 10.

The e-retailer has gone beyond just advertising to integrate the campaign with the content that people consume.

Along with using technology to reach out to mobile-savvy Indians and create disruptions, the company is also aggressive with its TVCs and is booking a significant share of ad slots during all hours on entertainment and sports clusters

Flipkart has upped its war chest with an infusion of Rs 3,400 crore from the parent Walmart to take on the onslaught of Amazon.

“For us, BBD is not just a sale. It is a brand in itself. It is the biggest retail phenomenon that this country has ever seen,” said Kunal Dubey, Director Brand Marketing Communications and Head Media Planning, Flipkart.

During the coming 30-day festive season, Flipkart hopes to get at least Rs 3 billion in GMV, quoted media reports.

The company has come up with a special ‘DUS’ strategy for the event.

“10 in Hindi is known as ‘DUS’, meaning disruptive, unique and scalable. If it is anything less than 10/10, it is not a BBD idea. For BBD, we keep our bar even higher when it comes to crafting the consumer proposition, formulating the campaign design and rolling out brand campaigns — in terms of ensuring the proposition is relevant, the campaign design is unique and led with innovations that create market disruptions,” Dubey added.

To promote BBD, Flipkart is activating the entire marketing ecosystem, making the event stand out from its previous versions.

“If you look at marketing around BBD, for us it is about how we are creating disruption, how are we creating benchmark,” he added.

“For BBD, our intent also is to set the benchmark for how marketing fraternity campaigns are designed, planned and executed,” Dubey said.

Flipkart says it has scaled the aspects of personalisation of the marketing campaign to a level that has not been tried across Southeast Asia.

When asked what differentiates this year's campaign from the previous years, Dubey said, “It is not just about using sellers’ brands and creating television commercials but how do we use them interestingly and in a disruptive manner to create content around them. Even on TV, the disruption has been not just to play a normal TVC. We have taken memes to TV and that is something the internet audience consumes a lot.”

Dubey said that personalised videos (in all languages) have been created using human insights with artificial intelligence.

The company has crafted its BBD campaign around the tagline ‘Ab India hoga budget se mukt’.

The theme has been conceptualised keeping in mind the themes of last two seasons, which were Itne main itnaaa milega (when the norm is Itne main sirf itna hi milta hai) in 2016 and last year it was Ab mehengaai giregi (when inflation is the one thing that nation cribs about).

“From the theme perspective, we keep certain guardrails for BBD. It needs to be colloquial, it needs to match the stature of BBD and its scale, and it needs to solve for people's shopping needs. We have presented campaign ideas where our intention was to see how we could come up with something that showcases that during BBD the value of the money goes up. To present this idea to the nation, we wanted to come up with a campaign design that not only has scale but creates massive disruption and serves as a new way to present the BBD as a brand to the country,” Dubey added.

The brand has roped in a long list of celebrities, including Amitabh Bachchan, Virat Kohli, MSD, Deepika Padukone and Sunil Chhetri. The list extends to regional stars too such as Mahesh Babu, Tammana, Mahesh Manjrekar, Prosenjit, Yash, etc. It has also tied up with leading TV celebs.

Flipkart has also partnered with Google Zoo, reputed for its industry-disrupting ideas, to create the ‘Big Billion Days ka boss’ campaign. “We will select four products daily for users to choose from. A customer can then bargain and negotiate with Google Assistant to lower the price of their product down to an acceptable level. At the end of the day, the customer with the lowest price is crowned ‘Big Billion Days ka boss’, wins the product for free, and the price they negotiated becomes the price of that product on Flipkart’s platform,” Dubey said.