The Supreme Court of India has decriminalised homosexuality and abolished section 377 and the country is rejoicing. Social media is abuzz with people lauding the SC for the historic judgment. Brands too have joined the celebrations online 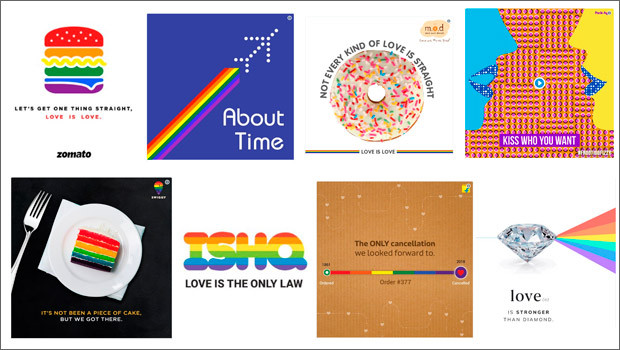 In a historic judgment, the Supreme Court of India has decriminalised homosexuality and abolished section 377. With the people of the country rejoicing and celebrating the repeal of the colonial era law, brands too joined the bandwagon and coloured themselves in rainbow colours online.

BestMediaInfo.com looks at some of the select content that brands have posted online celebrating the apex court’s decision.

Zomato has come up with a quirky message, yet an important one in its latest tweet.

Indigo got it straight and didn’t miss any occasion for marketing.

Indians have always welcomed good news with sweets. And Swiggy followed this tradition along with a reminder on how far the country has come in this fight.

Ceat Tyres talked about the prevalent gender binaries in the society and how it is time that we opened ourselves to change.

It was about time they squared the circle. #Section377 #377Verdict #RideWithPride pic.twitter.com/2PKCZSv89B

Flipkart celebrated the victory in a light way by punning on the word, ‘order 377’ and ‘cancellation.’

Here's to celebrating the cancelled order that has delivered dignity, equality, individualism and freedom. #Section377#LoveIsLove#NayeIndiaKeSaathpic.twitter.com/6XqX0V7NlZ

The Hindi general entertainment channel used its new tagline #chunoapnerang and changed the colour of its logo.

The largest TV network of India called it #NayiSoch while turning its logo rainbow.

The brand celebrated love in the support of gay rights victory with a GIF content.

Today, we celebrate the freedom to love. #LoveIsLove pic.twitter.com/jyWLrwNpDp

The FM station called love as the only law in its digital ad.

Mad Over Donuts, in its posts, spoke about love with no boundaries and shape.