Baggit talks about gender equality in its first TVC

The women's bag and accessories brand has launched its first commercial with actress Shraddha Kapoor as brand ambassador, portraying Baggit as a brand for independent working women 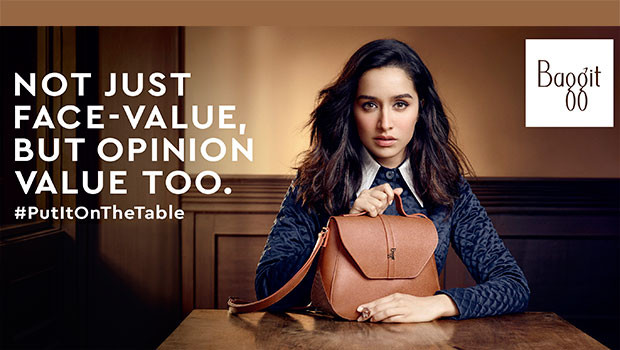 Baggit, the women’s bags and accessories brand, has launched its first ever TVC that addresses the globally prevalent issue of gender equality and women empowerment. The brand has intelligently used social advertising to promote itself among the targeted audience, which includes young working women.

According to Atul Garg, Chief Marketing Officer, Baggit, the brand wants to penetrate in the smaller towns of India along with making Baggit the bag of choice for young women in metro cities.

“With our sustainable practices, we are reaching out to the young consumer in tier-III cities, or probably a little beyond that as well. TV still constitutes a larger pie when it comes to advertising or communication. So, it’s an obvious choice and correct leadership stance. Bags really reflect how you think and that is getting percolated in smaller cities and to reach them, television is required,” said Garg.

The brand has used influencer marketing and digital mediums as a major part of its strategy until now. However, in order to reach the consumers beyond tier III, Baggit has increased its marketing budget by 5% more to promote the new campaign.

“The audience, which is buying online, is very young. The entire demographics and psychographics have changed. This set of audience has to be addressed. They need to know about us. We have been planning for a TVC for quite some time now. So this year, the budget has increased by 5%. However, our media mix changes every year. In the previous years, digital had played a big role, but still not the largest. Next year, we are planning to increase the budget if we get a good response. We are taking calculated steps now.”

When a brand makes a maiden TVC, it usually chooses functional advertising. However, leaving the classical approach aside, Baggit has incorporated a social message. Being a 30-year-old brand, it still prefers to be pocket-friendly, but to take in a larger share; it also has a premium brand.

Garg said, “We have a brand called Nina Lekhi in the name of our founder, which is a premium brand and is available in selective counters. The price range is high and the product is very slick. That’s one space we are trying to push and create that ‘Baggit halo’. The second piece is what this whole new communication is all about. There’s no primary or secondary. Fashion is equal to the messaging and vice versa. The entire idea is to uplift the brand in a meaningful way. Mere fashion that has no meaning comes to a full stop or takes a dip. People are looking for meaningful advertising now. Therefore, what we target is the consumer’s psyche. We call this going beyond demographics and that’s what we are addressing.”

Baggit has around 1,000 stores in India and has a wide presence across the digital platforms and yet, e-commerce only accounts for about 10% of their overall sales.

“E-commerce today is just 10%, but it’s growing. The figures change in a month. My stores give me around 35-40% of the business. The distribution is changing and now, sometimes, we look at our data and we realise that we are giving our products to 300 to 400 cities. And with this new campaign, we are looking at an increase in sales by 25% next year,” said Garg.

Conceptualised by Famous Innovations, the TV campaign invites women to put their thoughts on the table.