Flirt with your city with TOI’s metro supplements

The new campaign conceptualised by JWT will cover Delhi, Mumbai, Bangalore, Chennai and Kolkata with a different brand film for each city 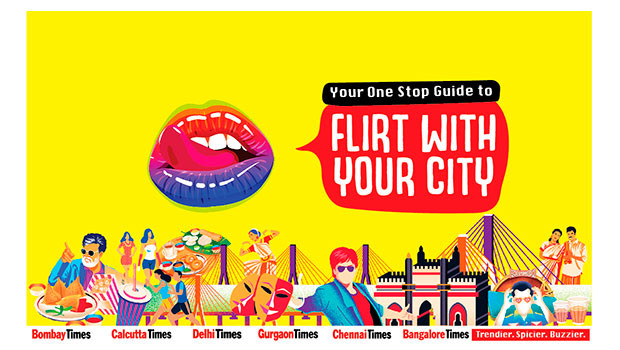 As competition from online media grows in terms of both revenue and readers moving towards the medium, newspapers are leaving no stone unturned to hold its existing readers and lure potential consumers. In order to strengthen the affinity among its readers, India’s largest read English daily The Times of India has launched a new campaign showcasing the power of its metro supplements. Admitting that online is a reality in our lives and it will continue to be, Sanjeev Bhargava, Director, Brand, The Times of India, told BestMediaInfo.com, “A newspaper will continue to have its own relevance and that relevance can hardly ever get compromised. If talking about newspapers in general, we are the only source of validated and curated news.”

He said that TOI has upped its game in the coverage of metro cities and city-based supplements such as Bombay Times and Delhi Times were no more giving just Bollywood and glamour news but were also carrying various other city-based beats such as culture, heritage, iconic destinations, food and various other hidden aspects.

“While people live in the city and love their city, they only get familiar with a certain part of the city. But the fact is that your city is offering so much more. There are a lot of exciting things happening in other parts of the city which you are completely unfamiliar with," Bhargava said.

The campaign focuses on the fact that supplements have evolved over a period of time and have more to offer by highlighting various important, cult, classic and iconic destinations in Delhi, Mumbai, Chennai, Bangalore and Kolkata while rekindling one's love for their city.

"This campaign inspires you to go out and discover the other parts of the city and that is why it is called ‘Flirt with your city’," Bhargava added.

“The campaign also informs you that the brand has evolved and proliferated over the period of time and now we have a metro supplement in so many cities across the country. It is not so much about page 3 anymore, but more about the city. It is about what’s happening, new and exciting. There is a special focus on women and young readers. It is not something that happened overnight. We thought that this is the time to announce to the world that this is what we are and this is a new and exciting version of ours and something that we should introduce to our readers," he said.

The first time when Bombay Times came out with a campaign was in 2012 when they entered into their 18th year of existence. The campaign was highly appreciated and was conceptualised by Taproot Dentsu, which tried to bring out that glamour is the essence of the supplement, and shows how it has seeped into the lifestyle of its readers.

Unlike many other newspapers, BT (Bombay Times) is the one that has come out as a brand of its own, irrespective of TOI. A lot of people have said that if BT was to be subscribed and circulated independent of the main paper, it would still have the highest circulation. Among all the supplements for the various metros, BT performs the best and TOI has not been able to replicate that success with any other city supplement such as Hyderabad Times, Delhi Times, Kolkata Times and others.

Explaining the reason behind this, Bhargava said, “A lot of energy that BT derives is from Bollywood and Mumbai is the city for it. That’s why probably BT is the most potent of all the metro supplements. That doesn’t mean that the other supplements are weak. Our Kolkata and Chennai supplements are very strong. Delhi and Gurgaon supplements are not that strong but they have their own strong readership in the respective cities.”

Explaining the reason for launching the campaign after such a long gap, Bhargava explained, “Media brands are not like FMCG brands. In media, the product itself is a brand every day. Therefore, we don’t want to do campaign every year. You do a campaign when you want to announce something new about your publication.”

Citing the fact that brand building for a publication is very different from what is done for an FMCG brand, Bhargava said, “It is not about building a brand in the traditional sense of marketing. People develop a very strong relationship with the publications as they read daily. It is something that comes to your house every day. It is important for us to set a context to that daily relationship and that’s what we have tried to do with the campaign here.”

Being the frontrunner, almost in all the markets, what was the need for the daily to advertise?

TOI has decided to keep the focus on the top five revenue generating cities from supplements in the latest campaign and might launch ads for other cities going forward. In first phase, the campaign will cover Delhi, Mumbai, Bangalore, Chennai and Kolkata with a different brand film for each city.

The brand spends 10% of marketing budget to promote its metro supplements.

The campaign has been conceptualised and executed by JWT India.

JWT offices across these cities have worked on the campaign to give a localised impact. The campaign will be heavily digital lead followed by print and television. The ad films will also be showcased on other channels than just Times Network Group ones.

Senthil Kumar, Chief Creative Officer, JWT, added, “Everyone wants to talk about the city they are born in and the city they live in. That is the kind of people who read these city editions because we believe that these are the only people who love their cities. We wanted to reignite the love for the cities. Therefore, we have tried to recreate the pop culture of these five different cities.”