In addition to the creation of visual branding for Trakstar, Scarecrow is handling creative duties for the entire ATL and BTL communication 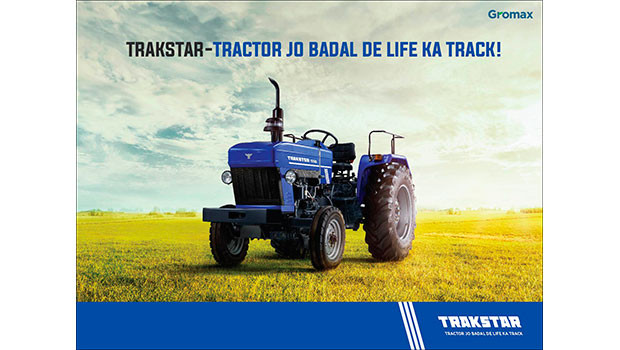 Gromax Agri Equipment Limited (formerly known as Mahindra Gujarat Tractor Ltd.) has launched a new tractor brand – Trakstar, in the 30-50 HP category -- and appointed Scarecrow Communications as the creative agency for the product.

Scarecrow Communications has been associated with the brand right from the inception stage; including giving the nomenclature and positioning of Trakstar as well as the parent company, Gromax.

Gromax is an agri-equipment entity committed to the cause of enhancing and enriching the lives of farmers with affordable mechanisation solutions. The company believes the life of a farmer in India can truly change only when he is able to derive the maximum growth. The company’s affordable mechanisation solutions – Trakstar Tractors and Trakmate farm implements – endeavour to carry out this task.

Harish Chavan, Director, Gromax Agri-equipment Limited, said, "This is not the first time Mahindra is associating with Scarecrow team. They have previously worked on some of our brands like Trringo. We realised Scarecrow’s approach to develop brand communication is something that we resonate with and we were more than confident to award the creative duties to them. From branding of the Tractor to coming up with company and implements names to developing positioning and communication for the brand, everything has been taken care of by Scarecrow, Mumbai."

As a part of the communication strategy, Scarecrow has also designed an innovative animation film for Gromax, which was showcased during the launch.

An inspiring song was also created for Trakstar launch. Keerthi Sagathia, who has given a voice for songs like Teen Thay Bhai, Robot, Raanjhanaa, among others and Ravindra Upadhyay, Channel [V]'s Samsung Super Singer’s winner, have sung the track. Manish Bhatt, Founder Director, Scarecrow Communications, said, “Mahindra has always been the leader in categories like tractors and SUVs. This entire project has been a precious opportunity for Scarecrow. Though we have an extensive experience of working on similar projects where we played a key role in the formation of brands like the creation of & Pictures (for &Network, a part of Zee Entertainment Enterprises Ltd. and Essel Group), our association with Gromax is still an inspiring experience.”

Arunava Sengupta, Founder Director, Scarecrow Communications, added, “India being an agricultural country, it is very important to have a brand that touches the lives of farmers in the true sense. Since Gromax and its flagship brand Trakstar meet the category’s need of the hour, we are all geared up to bring something meaningful to the table.”

In addition to the creation of visual branding for Trakstar, Scarecrow is also handling the creative duties for the entire ATL and BTL communication. This includes TV commercial, digital film, radio, print, OOH, retail visual identity, media launch as well as road shows, skit and engagement ideas for the farmers.