With Varun Dhawan as its happiness ambassador, the channel has lined-up five new shows. The channel will have a phased rebranding and intends to have the fresh line-up in place by August end

After about a decade of entertaining audiences, Sony SAB unveiled a fresh, vibrant and energetic avatar. The channel felt it was the need of the hour as they had to keep pace with the consumerŌĆÖs journey.

By August end, the channel will have a fresh line-up of comedy shows as they are slowly doing away with the old shows. Of course, Taarak Mehta Ka Ooltah Chashmah will continue to run on the channel. The channel may think of bringing in new characters to the show in order to have its dose of fresh humour for the channel.

At a recently held press meet, Neeraj Vyas, Senior EVP and Head, Sony SAB and Max cluster of channels explained how they went about rebranding the channel. He said, ŌĆ£We realised that India stands at No. 155 in the World Happiness Index, which is below Pakistan and Bangladesh and that is a serious problem. And thatŌĆÖs how the rebranding exercise began three months back.ŌĆØ

The new brand expression underlines the channelŌĆÖs conviction ŌĆśif you are not laughing, you are not living.ŌĆÖ SABŌĆÖs new creative expression encompassing new logo, tagline, brand films and new shows is aligned to its goal of making SAB the comedy icon of India.

The new logo features colours, including bright orange and yellow symbolising vibrancy, comfort and warmth with a little oomph in the purple. Everest Brand Solutions was the agency responsible for the rebranding. 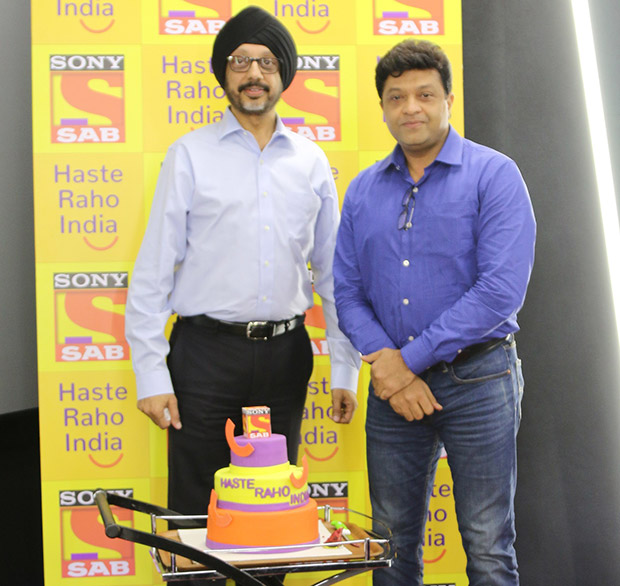 On the content front, the refreshed Sony SAB will have five new shows. The channel recently launched ŌĆśSajjan Re Phir Jhoot Mat Bolo.ŌĆÖ Along with that, the upcoming line-up of shows includes ŌĆśTV, Biwi Aur Main,ŌĆÖ ŌĆśTenali Rama,ŌĆÖ ŌĆśShankar Jay Kishan, 3-in-1,ŌĆÖ and ŌĆśAadat Se MajboorŌĆÖ. There will be a phased rollout of each of the shows. By August end, the prime time should be 7:30 pm to 10:30 pm.

Vyas intends to have a finite series, maximum being a year for a show. However, if a show is doing very well, the channel may think of going beyond a year.

Varun Dhawan has been roped in as the happiness ambassador for SAB. The actor brings in the desired youthfulness, fresh wave energy and contemporariness to the brand. ŌĆ£We wanted to try and target a younger audience, hence we roped in Varun Dhawan as our happiness ambassador. He was a perfect fit for the channel. He is young, energetic, vibrant has a colourful personality and perfectly fits the bill for us,ŌĆØ added Vyas.

The channelŌĆÖs promise of Haste Raho India is brought alive through a series of brand films anchored by the actor. The new brand personality is aligned to changing aspirations of new India.

The channel wants to put an extra effort towards its audience in the North. They already have good traction from the West. The channel will be doing 360 degree marketing, which includes newspapers, out-of-home, digital, television, which includes channels outside the network, cinema and radio. Ad rates remain unchanged as of now.

The refreshed avatar of the channel went live on June 13 at 8:30 pm. NP Singh, ŌĆÄCEO, Sony Pictures Networks India, said, ŌĆ£For over a decade, SAB has emerged as the most distinctive channel in GEC and built a sizeable loyal audience. The new, re-energised SAB is all set to deliver on the promise of Haste Raho India as its mission is to be recognised as the ŌĆśfrown flipperŌĆÖ for Indian audiences. The essence of this new avatar will be reflected in SABŌĆÖs new identity and show line-up.ŌĆØ

Varun Dhawan, Happiness Ambassador for SAB, said, ŌĆ£As SABŌĆÖs happiness ambassador, I am excited to partner with the channel to spread laughter and joy among millions of Indians. Having always enjoyed SABŌĆÖs distinctive content, I look forward to its fresh range of shows lined up. This refreshed flavour of comedy from SAB, will certainly kick-start a happiness movement.ŌĆØ

How NTO 2.0 gives wings to the FTA channels