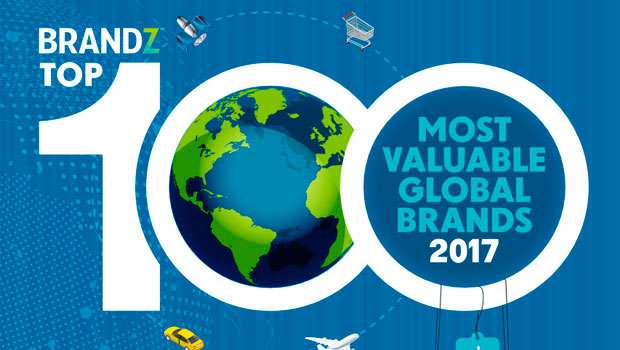 Amazon achieved the highest dollar value growth of all brands in the Top 100 ranking, increasing by $40.3 billion (+41 per cent) to $139.3 billion to take the No. 4 position. The retail giant has continued to focus on its technology ecosystem honed to meet multiple consumer needs such as online shopping, rapid delivery and entertainment, as well as introducing new artificial intelligence-enabled services including grocery delivery and personal assistant Alexa. David Roth, CEO, EMEA and Asia, The Store WPP, said, “This year’s BrandZ global top 100 continues to demonstrate that strong brands deliver superior shareholder value and returns regardless of disruptive external climates. Dubbed the ‘The Frightful Five’ by some, the tech giants that head the rankings are more like the ‘Fearsome Five’ to their competitors, given their huge brand power and a seemingly unassailable market position.”

Other highlights in this year’s ranking include Chinese brand Tencent (No.8), which saw increased use of its social platform WeChat and entered the Top 10 for the first time, with a brand value increase of +27 per cent to $108.3 billion. Adidas was the fastest riser by percentage growth (+58 per cent, $8.3 billion), followed by Chinese premium alcohol brand Moutai (+48 per cent, $17 billion).

As the largest and definitive brand-building platform in the world, BrandZ reflects the brands that are integrated into today’s consumer lifestyles. It is the only brand valuation study to combine interviews with over three million consumers globally with analysis of the financial and business performance of each company (using data from Bloomberg and Kantar Worldpanel). The value of the BrandZ Top 100 Global Brands confirms that strong brands continue to outperform their competitors. Compared against key benchmarks over the past 12 years, the portfolio of BrandZ Top 100 brands grew 50 per cent more in value than the S&P 500 and 3.5 times the MSCI All Country World Index.

The 2017 ranking shows that the balance of power has truly tipped towards the consumer-focused technology brands that develop ecosystems that cater to many needs, simplifying an increasingly complex world. More than half of the Top 100’s total brand value is contributed by technology-related brands (a definition that includes telecoms and online retailers), up from a third in 2006, and these have grown +16 per cent in the last year compared with +4 per cent for non-tech brands.

Nine of the Top 10 are technology-related brands, as are all seven of the newcomers to the Top 100 in 2017: XFinity, YouTube, Hewlett Packard Enterprise, Salesforce, Netflix, Snapchat and Sprint.

Retail was the fastest rising category, increasing +14 per cent in value over the last 12 months, driven by ecommerce brands such as Amazon and Alibaba which, like many native internet companies, continued to add physical stores to their sales channels. Overall the value growth of pure online retailers has increased +388 per cent since 2006, while traditional retailers dropped -23 per cent as they took longer to adapt their offering to include online. The technology category grew +13 per cent, while fast food was this year’s third highest growing category (+7 per cent), as the leading brands introduced fresh food and value menus as well as customer touchpoints innovations that enhance the brand experience.

In terms of regions, US brands dominate the ranking, with 54 brands in the BrandZ Top 100, worth 71 per cent of the total brand value. In the last year these brands have grown +12 per cent compared with an overall -1 per cent decline for brands with origins in the rest of the world except China where overall brand growth, excluding state-owned enterprises, was +11 per cent.

The top 20 B2B brands increased their value by 11 per cent. Microsoft remains at No. 1 growing +10 per cent to $143.2 billion, while Shell is the fastest B2B riser, increasing +23 per cent to $18.3 billion. The ranking also shows that as the digital world creates overlap between business and consumer environments, the border between B2B and B2C is disappearing, creating B2H (Business to Human) brands. Consumers can increasingly carry out a variety of activities, from online shopping to watching television, under the banner of one brand and across multiple devices. This convenience for consumers also allows the most powerful brands to minimise the risk of consumer switching.

Technology allows businesses to provide their offerings globally from day one. This is fostering a new breed of entrepreneur, who is not restricted by the geographical or sector boundaries that have traditionally limited the speed and scale of growth.

• The BrandZ Top 100 is getting younger. The average age of a brand is now 67 years, compared with 84 years in 2006, reflecting the entry of the newer technology brands and the emergence of brand China.

• Brands that make it clear how they will make consumers’ lives better, such as Huawei and Toyota, have grown three times more on average over the last 12 years (the top third grew +170 per cent compared to the bottom third which was +57 per cent).

• Great communications puts a brand at an advantage. The top third in terms of strongest communications (including McDonald’s and L’Oréal Paris) have grown 196 per cent in value, compared with 47 per cent for the bottom third. This is because they have successfully amplified the difference they have built.

Doreen Wang, Kantar Millward Brown’s Global Head of BrandZ, said, “This is the era of internet giants that have developed ever-growing ecosystems that touch and connect consumers, with the overall aim of making life easier, simpler and better. Technology with the consumer at its centre has redefined our expectations, and we now take for granted that products, services, tools and content are immediately available at our fingertips. These brands also demonstrate great elasticity – they confidently and comfortably play in new territories and new categories to develop and expand their customer bases.”