This IPL season, Kingfisher made all pause and play

Conceptualised and created by JWT Bangalore, the Kingfisher Mannequin Challenge TVC serves us a fresh recipe in the formulaic world of television commercials, this IPL season 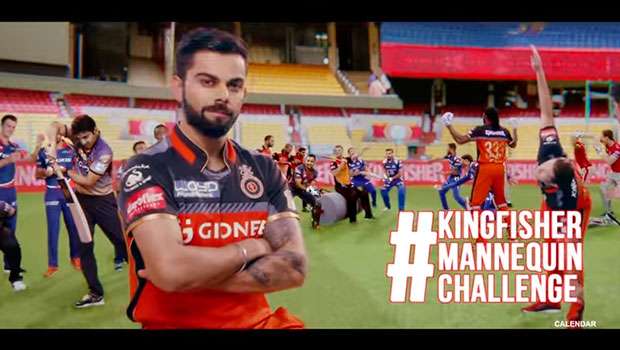 With the 10th edition of the Indian Premier League underway, Kingfisher is all set to refresh people’s imagination with the formula -- Lights. Camera. Freeze. The latest integrated campaign unveiled by Kingfisher elevates ‘Divided by Teams, United by Kingfisher’ positioning in a rather unique way. It was a few months back that an internet phenomenon called Mannequin Challenge went viral on the internet. And Kingfisher decided to ride on this phenomenon, giving it the twist of good times. They gave a new flavour to the challenge and the #KingfisherMannequinChallenge was born.

By doing justice to the grand scale of the Indian Premier League, the Kingfisher Mannequin Challenge arrests an IPL fan's imagination and showcases their favourite cricketing stars from around the world in all their glory, frozen on screen. It catches their attention on television and keeps the curiosity built till the end of the film. Commenting on the campaign, Kishore Tadepalli, SVP & Managing Partner, JWT Bangalore, said, "While all these years fans have seen their favourite players sing and dance to the ‘Olalalalaleo jingle’, we knew we wanted to take the celebration a notch higher at this grand stage of IPL 10."

The phenomenon of the #KingfisherMannequinChallenge started online, with Kingfisher challenging Rising Pune Supergiants. Pune released their team’s Mannequin Challenge and challenged Delhi Daredevils. As teams challenged each other online to their own version of the Mannequin Challenge, the players also called in entries from their fans. Entries came in huge numbers and viewers responded with their own version of the #KingfisherMannequinChallenge.

The TVC of the first challenge completed by Rising Pune Supergiants

The TVC of Mannequin challenge done by Delhi Daredevils

Samar Singh Sheikhawat, Senior Vice-President (Marketing), United Breweries Limited, said, “For a decade, Kingfisher has brought together a majority of the teams and fans of the most exciting Premier T20 club Cricket Tournament. This year we celebrate 10 years of ‘Good Times’ with the Kingfisher Mannequin Challenge, which by far has been the most fun and exciting content on social media. We took the mannequin challenge up a notch by blending it with the spirit of the game and got the fans excited with a series of videos that featured their favourite teams.”

Kingfisher has always tried to attract the audience with its fresh and innovative campaigns matching with the recent trends and with the sharing of quirky Dubsmash videos making all the noise, Kingfisher chose to ride the Dubsmash wave sweeping in the country and run a promoted trend on Twitter featuring a Oo la la la leo dubsmash created by a user.

The ‘Oo la la la leo’ advertising campaign was first launched by Kingfisher, the King of Good Times for IPL 2010, in which players from the top four teams of IPL, Royal Challengers Bangalore, Delhi Daredevils, Deccan Chargers & Rajasthan Royals aimed to gun down each other on the field, but off the pitch they can’t stop adjusting their vocal chords to get the legendry Kingfisher jingle right! The TVC was for a total duration of 30 seconds and attracted a lot of audience.