Amul and its creative agency Dacunha Communications share their side of the story to BestMediaInfo.com 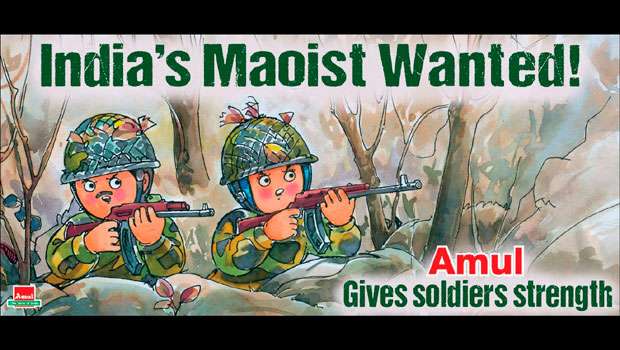 Amul’s topical ad on the Sukma attack has come under the consumers’ radar and is being heavily trolled on social media by netizens and influencers who feel it is insensitive. But Amul says it conceptualised the ad as a gesture of support towards the Indian soldiers. The creative agency behind Amul’s milk products is Dacunha Communications.

On April 24, 26 CRPF jawans were killed in a deadly Maoist ambush in Chhattisgarh's Sukma when they were having lunch. Later, Amul came up with a topical showing two soldiers with guns and above them was written ‘India’s Maoist Wanted’. Right below, it was written ‘Amul gives soldiers strength’.

Amul’s Twitter handle posted the ad on the very next day of the attack but perhaps did not anticipate the possible backlash. Along with a few netizens, advertising industry experts too called it foolish, insensitive, in bad taste and not at all funny.

Reacting to the backlash on social media, Amul posted its compilation of its earlier ads done in support of Indian army:

All earlier topicals by Amul on the Indian army were done when the army had achieved something. But the latest one comes when the nation has lost its 25 security personnel and maybe it is the timing of the ad that has got social media up in arms.

When BestMediaInfo.com reached out to RS Sodhi, Managing Director of Gujarat Co-operative Milk Marketing Federation (GCMMF), he said there was no trolling at all. “We can say that there was no trolling. We always get comments on Twitter and Facebook for all our topicals. A few thought this was commercialisation of a tragedy. The Amul campaign is an observer of events in the country and has always stood by our armed forces. Our compilation of the topicals on events related to the armed forces made them realise that our campaign is not just about selling butter. The overall feedback has been quite positive.”

To counter the comments on social media, Sodhi said, “We immediately made a post and started sharing: Amul: always with armed forces. Jai Jawan, Jai Kisan. We have started getting positive comments too.”

The agency spokesperson added, “In the hoarding, we are in support of the soldiers. We are saying that the Maoist movement that began once upon a time, the movement of the suppressed, has now become just about killing of people. We are saying that they have become criminals. India’s most wanted have become criminals. How is it insensitive, I do not understand?”

When pointed out that people must have thought it was not the right topic to comment on, the spokesperson said, “It is not like that. People have that mob mentality. If a person says something, you start following him without using your own brains. Think before you follow somebody. The first person who might have tweeted about it, must have needed free publicity.

The spokesperson said, “Most of the people who are trolling the ad might not have even read the line that they are talking about. We are not advertising our product. We are saying Amul gives soldiers strength. The headline is also very clear. We are officially condemning the Maoists. When people are criticising the Amul ad, they should understand what the line wants to say. Don’t criticise just because somebody else has criticised. The lines need to be read before you jump into the fray.”

Sodhi concluded, “Amul has always stood with the Armed forces of the country. In this topical too, the Amul girl is shown fighting with our jawans.”