Airtel decides to take on ASCI

On March 29, ASCI held a meeting to decide whether Airtel’s ad is misleading. In its recommendation, the advertising watchdog asked the brand to either modify or withdraw the ad completely. As of now, the case rests in Reliance Jio’s favour 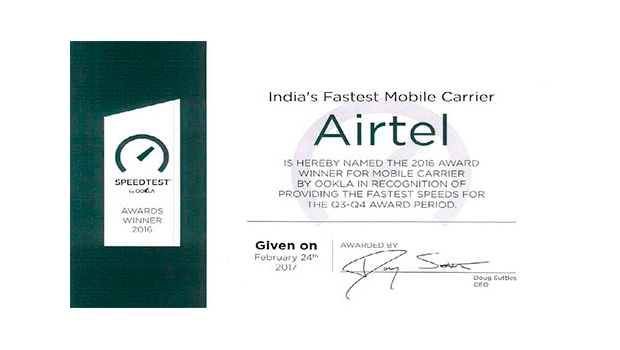 Advertising watchdog ASCI (Advertising Standards Council of India) has upheld Reliance Jio’s complaint against Airtel’s ad claiming to be the India’s fastest mobile network. In its complaint registered with ASCI, Jio had claimed that Airtel’s ad as “misleading and incorrect”.

Defying ASCI’s recommendation, in a statement, an Airtel spokesperson said, “We do not agree with ASCI’s decision and will file an appeal as per guidelines.”

The Fast Track Complaints Committee (FTCC) of ASCI met on March 29, 2017 and it has asked Airtel to withdraw the TVC and the website advertisement by April 11, 2017.

BestMediaInfo.com reached out to Srinivasan K Swamy, Chairman, ASCI, to know his view on Airtel seeking reconsideration and amendment in the decision. Swamy said, “If Airtel seeks a review as per the guidelines prescribed by ASCI, particularly the point relating to additional information not provided earlier, the CCC (Consumers Complaint Council) will review the decision. But one can’t assume the outcome of the review. CCC could either change their finding or reconfirm their earlier recommendation.”

At the meeting, FTCC noted that the claim by the advertiser is not specific to 4G technology whereas the TVC has visuals with reference to 4G. The speed comparison visual also has a reference to 4G in the notification bar and shows poor signal strength for the other service provider. FTCC considered this representation to be misleading by ambiguity and implication.

BestMediaInfo has a copy of the ASCI recommendation which states: “While the advertiser submitted an Ookla certificate, they did not provide an explicit test methodology to substantiate that the method is robust to capture that the sample, and is representative and comparable across operators, geographies and consumers. The FTCC referred to the TRAI website with respect to the coverage of Airtel vis-a-vis Reliance Jio and noticed that there is a significant gap between geographical dispersion of Airtel and Jio 4G subscribers which could impact the comparison. Based on this data, the FTCC concluded that the claim was not adequately substantiated and the basis of comparison has been so chosen as to bestow artificial advantage to the advertiser.”

In the meeting, FTCC also considered the term “Officially” to be misleading as this test is not based on any government organisation or recognised authority such as TRAI in this category and hence, exploits consumers’ lack of knowledge.

The copy also stated: “The TVC and website advertisement contravened Chapters I.1, 1.4, I.5 and IV.1 (b) of the ASCI Code as well as ASCI Guidelines on Disclaimers Clause I. The complaint was upheld. We have advised the advertiser to modify appropriately or to withdraw the said TVC and the website advertisement by April 11, 2017.”

Further explaining the reason for defying ASCI’s decision, the Airtel spokesperson said, “Our campaign is based on findings by Ookla, the globally recognised leader in mobile speed tests and also a benchmark for reputed global operators. We have shared all supporting facts with ASCI and strongly believe that our campaign is compliant with all guidelines.”

On its part, Ookla, taking Airtel’s stand, said in a statement: “Ookla fully stands behind the accuracy and reliability of the methodology used to designate Airtel as ‘India’s Fastest Mobile Network’. The award designation was validated using the IP methodology described above for all speed test results during the last six months of 2016. When analyzing the data for all of 2016, Airtel was still the clear leader. When analyzing data for 2017 to date, Airtel is still the clear leader. It is worth noting that after correcting for the Android limitation, Airtel’s lead over Jio increases for all aforementioned date ranges.”

Previously, a few more brands have gone against ASCI’s decision. Around May 2015, Biolif Body Buildo had moved court against an order of ASCI. Havells, the electrical equipment maker, also went to court in October 2015. In July 2016, Patanjali took the advertising watchdog to court. This was followed by Reckitt Benckiser which took ASCI to court for its Dettol ad in September.

Requesting ASCI to change its decision, the Airtel spokesperson said, “We will be happy to provide more details if required, and hope ASCI will reconsider its decision.”

It may be noted here that the government’s 2006 notification stated that at least the television commercials have to abide by ASCI rules. So, does indicate that some brands are willing to take on ASCI for its decisions?