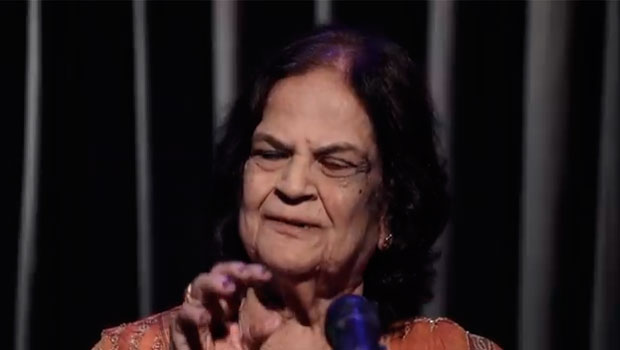 How often does one talk about death in the family? Whenever the topic comes up for discussion, the atmosphere turns gloomy. Sit back for a few minutes and think about the people who know that they are ill and death is inevitable to them; how do they deal with it? Should they give up and live life like a walking dead body? Or embrace the leftover days in life and live it to the fullest?

In a society where death isn’t spoken about, the #LaughAtDeath campaign features terminally ill patients who performed a stand-up comedy show for their families and doctors, thus demonstrating that palliative care helps patients get comfortable with death. And even joke about it.

This public awareness campaign on palliative care by The Indian Association of Palliative Care (IAPC) help Indians #LaughAtDeath. The path-breaking campaign is conceptualised by Medulla Communications.

In India, death is a taboo topic and people are uncomfortable discussing it, leaving terminally ill patients and their families confused, lonely and often depressed. Palliative or end-of-life care focuses on making terminally ill patients comfortable during their last days. It includes counselling for the patient and their family members. This helps them accept death, make the most of their last days and actually enjoy them.

Amit Akali, Chief Creative Officer of Medulla Communications, said, “This was the most difficult (almost impossible) project of our lives. Made easy and possible by the patients, eager to share their stories and make the most of their last days. They moved us with their courage and floored us with their live performances, some of them taking the stage for the first time in 85 years. They opened their lives to the stand-up comics and rehearsed hard for days.”

Mihir Chitre, Creative Group Head, Medulla Communications, was just happy to work with the patients, “The most rewarding part of this campaign has been interacting with the terminally ill patients. I think they’ve changed the way I look at life.”

Further talking on the insight, Chitre said, “The second insight was that when you are able to laugh at anything or rather when you are able to come to terms with something like this and talk about it. This is so true for anything in the world. It could be smallest of the problem. From there the idea came that talking about death in the society we live in is a taboo, we thought of laughing about it. Let’s accept it and try to be happy in our last days.”

Along with a few comedians, the creative agency people met palliative care patients and understood their stories and asked them if they would like to be a part of it. To their surprise, the patients readily agreed.

The instances shared in the film are from their lives itself. The comedians just made them funny for a stand-up show. Chitre added, “Every part of this was real to be honest. We promoted the event as a stand-up comedy show performed by normal comedians.”

The show started with real performances. Then there was a twist which came as a surprise to the audience when these people came on stage. This event took place at Cuckoo Club, Bandra. Doctors, family and relatives were invited to be in the audience at the event.

Praful Akali, Founder and MD, Medulla, added, “This is not just a campaign but an on-going project and platform for terminally ill patients to share their stories and spread awareness on palliative care. Love it because it brings alive the power of palliative care in a real way. It is about the strongest demo campaign you’ll ever see.”

The campaign has broken on Twitter through the first-ever comedy show on Twitter and will be amplified on social and digital media through a partnership with The Logical Indian–a platform that highlights news and issues that often miss the limelight in the traditional Indian media. Radio Mirchi is also joining hands to bring the #LaughAtDeath campaign to radio.

The campaign is supported by the website – www.endoflifecareindia.com – and its social media platforms (Facebook:https://www.facebook.com/EndOfLifeCareIndia/ Twitter: https://twitter.com/EndOfLifeCareIN YouTube: http://bit.ly/2n9aUmB ), which are equipped to counsel patients and connect them to palliative care centres across India.

Dr Mary Ann Muckaden, President of IAPC, concluded, “We are looking forward to increase access to palliative care in India with Medulla – right now only 3 per cent of cancer patients get even simple pain relief. Hopefully, this campaign will change that. A big thank you to the patients for sharing their stories, the comedians who trained them, filmmaker Rahul Sengupta for capturing their performances, the venue and media partners who supported us in creating awareness.”

Palliative care is the active total care applicable from the time of diagnosis, aimed at improving the quality of life of patients and their families facing serious life-limiting illness. The Indian Association of Palliative Care (IAPC) was set up on March 16, 1994 in consultation with the World Health Organisation (WHO) and the government of India as a national forum to connect, support and motivate individuals and institutions involved in palliative care. IAPC is today a 1,00,000 strong association of the finest nursing and healing hands of the nation, who are committed to bring about a positive change by reaching palliative care to every life that needs it.

Peers go gaga over the ad!

It is one of those ad reviews where people could not find anything that they could pinpoint at. Kudos to the creative team!

Just like his mesmerising poetry, Prathap Suthan, Managing Partner and Chief Creative Officer, Bang In The Middle, ponders over life and death after watching this beautiful piece. He said, “It is not the typical message or typical actors. These are real people who are perhaps going through their last stages of illness. It’s a very brave stance and one that goes beyond advertising. If anyone genuinely has a fear, this is what the fear is all about. The fear of what illness it could be, and the fear of the end. While all of us know that none of us are immortal, this truth is often if not always a dark private fear. Something that eats you from the inside. Personally, I am as much worried of the journey’s end as much as the next person. This piece spoke to me. As I think it would speak to you or another. It’s a truth we cannot change and it’s best to embrace it. This is one of those things that we cannot stop. Maybe delay it a little, with healthier habits. But we cannot forever postpone it. Let’s face it. Maybe hope that there is palliative care that we can turn to, and life doesn’t have to be a drone of constant suffering. At least it’s one fear that we know is true and real. It’s the oldest fear. But this is a new voice that is necessary to calm us. To make us smile. Wonderful effort!”

Akashneel Dasgupta, Senior Vice-President and Executive Creative Director, ADK Fortune, said, “Coincidentally this piece of work came to me to review just after a day I was showing my team on what to do that’s really honest and moving. I am sure many of us would cite ‘Laugh at death’ as an example while briefing as well as reviewing subjects like these for many years to come.”

Dasgupta is all praises for the campaign, “Frankly, I am not a big fan of communication trying too hard to poke at your heartstrings, because most of them are forced and contrived. But this I must say this beats that rut by a mile, because it was never meant to do so. You laugh, you cry, all at the same time. We see the final result and say ‘wow’ but I am sure a lot of hard work has gone into training non-actors to deliver a performance that’s telegenic but still real. Kudos for what we see and what we don’t. It was an absolute honour to review this piece of work. Brave, honest, real and extremely novel. Makes advertising/ communication look much nobler as a profession than what it is.”

Nima Namchu, Chief Creative Officer, Havas Worldwide, said, “ It’s a fine example of lateral thinking from Amit, Praful and the creative team at Medulla Communications. The idea is bold, fresh and I for one was quite moved by it. The films are fine the way they are. Perhaps the solo piano soundtrack could have been less melancholic. I think it would have been even more impactful if the mood of the films were upbeat. Having said that, I wish I had thought of this. Bravo, Medulla!”

Ananda Ray, Creative head, South Region, “I have to confess, I am great at finding fault and nit-picking. And so, as I settled down to watch the #LaughAtDeath series of ads in support of Indian Association of Palliative Care, I was expecting yet another series of overwrought, sentimental ads, with – God forbid – forced laughs. Humble Pied into admitting that the nit-picking side of me was thoroughly disappointed. Instead, I was in awe of the sensitivity, grace and respect that the extremely tough situation of facing one’s death was shown. Even tougher to do when addressing it with humour and why also these commendable qualities stand out even more.”

Ray said, “More importantly, the communication fits so seamlessly and naturally with the subject it addresses, without rubbing it in one’s face, that it should become hard for a viewer to deny the need for palliative care – or not consider it when the time comes. This time, the fault lay in me for approaching this with preconceived notions.”