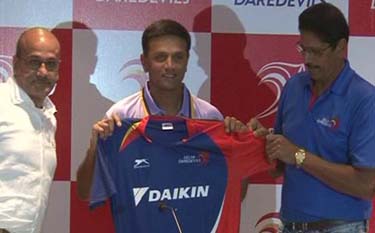 Mired in controversies, though the Indian Premier League (IPL) has been, the cricket tournament continues to attract attention, eyeballs and hence, monies. Not just the tournament, but even individual stakeholders in the league are gaining from the hype the event generates and of course, the popularity of cricket as a sport.

The tournament has been defamed in the past for issues like spot fixing, money laundering and corruption of the team owners.  Even so, the IPL teams have received their fair share of interest and monies from advertisers, who are ready to invest higher amounts in the ninth season of the tournament.

The association of brands with the teams of the tourney seemed endless, as the announcements kept coming even two days after the ninth edition of the Vivo Indian Premier League (IPL) T20 cricket tournament on April 9.

Here’s how some of the teams look this year:

Crowned champions of the 2013 and 2015 Indian Premier League T20, the Mumbai Indians are expected to bank on their winning streak and defend their title this year.

Etihad Airways and Jet Airways retained their sponsorship as official airline partners for the third year in a row and are principal sponsors of the defending champions at this year’s tournament. The tournament coincides with the May 1 debut of Etihad Airways’ long-awaited Airbus A380 on one of its thrice-daily Abu Dhabi - Mumbai flights. The flight will be operating as a codeshare service with Jet Airways and will feature the award-winning, ‘The Residence’ - which is the world’s first three-room suite on a commercial airliner.

In keeping with last year’s format, Etihad Airways’ logo will appear on the back of shirts worn by the Mumbai Indians for home matches. The Jet Airways logo will be featured in the same position for away matches. The sponsorship agreement entitles Etihad Airways and Jet Airways to extensive branding and messaging, beamed across LED pitch-side advertising and on giant screens at Wankhede Stadium.

Officer’s Choice Blue from Allied Blenders and Distillers, has announced a strategic association with Vivo Indian Premier League (IPL), as an Associate Sponsor beginning April 2016. The brand will occupy the back of helmet space for Mumbai Indians. Officers Choice Blue has been associated with different sports in India. The brand has also been sponsoring different music concerts and festivals.

The newest inclusion in the IPL family is the team representing Rajkot city, under the captaincy of ace batsman, Suresh Raina. Despite being in its first season, the team has gained tremendous popularity within the fraternity of advertisers. The Gujarat Lions squad includes cricketers like Brendon McCullum, Aaron Finch, Dwayne Smith, Ravindra Jadeja, Dwayne Bravo, Dinesh Karthik, Dale Steyn, Andrew Tye, Amit Mishra, Umesh Sharma and others. Gujarat Lions will play altogether 14 matches, of which seven will be played at two of their home venues, Rajkot and Kanpur.

Continuing its strong connect with sports, TVS Tyres is the Principal Sponsor for the team in the ninth season of the Indian Premier League (IPL). As part of this engagement, all the players’ jerseys will carry the brand along with similar branding on their training kits. A spectator stand at Rajkot/Kanpur will, moreover, bear the name ‘TVS Tyres Stand’. The brand had earlier been associated with sporting events like Pro Kabaddi League and Hockey India League among others.

Gujarat based brand, Astral Poly Technik Ltd, too, has partnered with Gujarat Lions as associate sponsor. With this association, the company looks to boost its image and reach out to the cricket lovers of Gujarat.

Kolkata Knight Riders has the distinction of being owned by Bollywood actor, Shah Rukh Khan. The team has a track record of being consistent and has won the championship twice in 2012 and 2014. The KKR brigade has some acclaimed names from the cricket fraternity, such as Gautam Gambhir, Yusuf Pathan, Robin Uthappa, Morne Morkel, Andre Russell, Sunil Narine and Brad Hogg, to name a few - who are known for their powerful performances in the T20 Format.

Sansui, the Japanese consumer electronics brand in India, has been associated with KKR for the third consecutive year, as the official partner. The Sansui logo will appear on the KKR jerseys. Sansui will also be launching special campaigns with team KKR and promote its premium TV ranges during the IPL season.

Rising Pune Supergiants is one of the most exciting cricket teams in the IPL. The team is led by Mahendra Singh Dhoni, who is also captain of the Indian national cricket team and includes stalwarts like Kevin Pieterson, Faf du Plassis, Steven Smith, R. Ashwin and Ajinkya Rahane. The team has been coached by Stephen Fleming and is a top contender for the IPL trophy this season.

Gulf Oil Lubricants India Limited (GOLIL), a Hinduja Group Company is a principal sponsor of the team. The Gulf logo will feature on the jersey of the team across all their matches and communications.

Another brand on the Supergiants wagon is Spykar. The jeanswear brand is the associate sponsor of the Sanjiv Goenka owned team. The team jersey will sport the Spykar logo on the back of the jersey. The deal is a strategic win for both the parties in the arrangement. Spykar addresses the ever dynamic Indian youth market and IPL reaches out to its enthusiastic audience.