Kyoorius Designyatra 2016: I am here because I am curious: W+K’s Tony Davidson 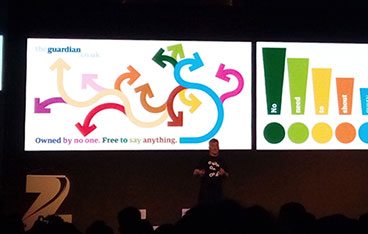 Kyoorius Designyatra 2016: I am here because I am curious: W+K’s Tony Davidson

Creative fest Kyoorius Designyatra began with an opening note by Tony Davidson, Global Partner, Wieden+Kennedy. Davidson began by starting with the theme of the event, ‘Why am I here?’

Davidson began by taking us through his journey in advertising. He recalled how he worked on a creative with Adidas. From there, there was no looking back for him. Davidson always believed that he doesn’t even have half of the creativity that his father had. But he is glad with the kind of work he has done.

He began his career with an agency called Boase Massimi Pollitt where he was a part of the creative team. After working for about a decade in the agency, Davidson decided to move on. His next stint was with Leagas Delaney where he was responsible for the Euro Tunnel campaign concept and the launch of Tanner Krolle handbags in the year 1996.

After spending two years in the agency, Davidson moved to Bartle Bogle Hegarty where he created Flat Eric for Levi's. He was also responsible for creating the Boot-cut campaign for Levi’s. The campaign that had the popular wall background for all its creatives was something different the brand did in those days.

Finally in 2000, Davidson joined Wieden+Kennedy where he worked on a host of clients. One of his favourite clients has been Honda. He narrated how fabulous it was working with them. Having done numerous campaigns for the brand, Davidson is still nervous when he sits with the head at Honda. He humorously narrated how the client still tells him not to sit nervous and that has been a key learning in his journey.

Davidson got a chance to work on Nike’s Run London campaign, which in a way united the whole of North and South London to compete with each other. The campaign gained a lot of traction. As many as 60,000 people took part in the run. It was another interesting piece of work that he’d worked on. Davidson also worked on brands such as Chambord, Finish, Lupark – a premium butter brand in London and many more.

Coming to where he began, he questioned his peers on why was he here? There were answers like because there is no other agency which will hire him. On a concluding note, Davidson reiterated that he was here because he was curious. Sharing a small tip with the audience, Davidson said, “Walk in stupid every morning. It doesn’t matter what people think of you. It will only make you a better person at the end of the day.”

There is so much to learn, he explained. Lastly, he quoted what Dan Wieden, co-founder of the agency, told him, ‘You will never sell this company,’ and this is what keeps Davidson going every day.