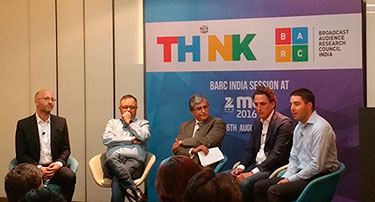 Content viewing is moving to digital and with this shift in consumption habit, it is becoming imperative for marketers and advertisers to understand viewability in today’s digital era. The general assumption is that tracking digital advertising and its effectiveness is easier than doing the same for traditional mediums like print and TV but the session ‘Understanding viewability in today’s digital era’ by BARC India at Zee Melt breaks the myth. It brings to fore the importance of understanding digital viewability.

Starting the session, Partho Dasgupta, CEO, BARC India had some grim news to share. Dasgupta started the session by bringing to everyone’s notice how Procter & Gamble, one of the biggest digital ad spenders, were cutting their targeted social media ads due to their ineffectiveness. Similarly, Unilever is planning to reduce their fees to digital agencies. Mondelez has also been delaying payments to digital agencies, seeking more accountability for their online campaigns.

“Advertisers in the West are demanding more stringent norms of measuring viewable impressions and transparency, providing comparison data like television. I came across a recent Shelly Palmer report that says 56% of digital impressions are non-viewable and about half of them, almost 60%, are fraudulent. So, similar to TV, more and more advertisers and agencies are demanding that commercials are served on relevant content and genres, matching their TG’s interest and also that they are targeted, drive awareness and help sales. Thought viewablilty has been growing in importance globally, in India it is still growing. Post television, BARC is moving on to the next journey which is how to measure digital video and at the same time how to measure total video between digital and television. Towards this, we think viewability is a concern and will become a bigger concern moving forward,” he added and emphasised the need to have a right measure of viewability.

Taking the discussion forward and pointing out one of the challenges faced by the industry, Guy Barbier, Business Lead of India, Moat, pointed out how there were no real-time consistent measures for valuing success in the digital space. “Clicks have been around for the last 20 years but it is an ineffective method of measurement. Firstly, nobody clicks on online ads and there is virtually no connection between clicks and sales. The reality and the ultimate challenge is that consumer behaviour is changing and it is rapidly evolving. Time spent on TV, radio, magazines is decreasing year over year and digital and internet consumption is increasing. As we merge into a more digitally connected world, we have some pretty significant challenges that we have to tackle,” he said.

Barbier believes it is not about just getting your ad out. Attention is the key and whether a communication has managed to get the consumer’s attention or not is fundamental and that is what should be measured, he says.

Speaking about viewabilty and where it sits in a cross-media campaign, Paul Goode, SVP, Strategic Partnerships, comScore, emphasised on audience measurement. According to Goode, it is essential to see that the content is reaching humans and not robots. “The human component is critical because we are seeing an increase in issues of fraudulent traffic. 8% of total traffic is fraudulent but the increase is in much more sophisticated terms of fraud, so simple fraud is unlikely to pick it up,” he said. Goode believes verified impression is absolutely fundamental to rule out fraudulent traffic and create greater effectiveness.

Brain Murphy, VP, Product Management, Integral Ad Science, spoke about the global trends on verified impression and how they derive real value from an impression.