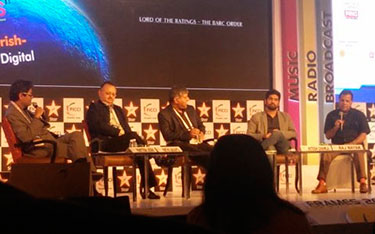 The year 2015 saw the advent of a new television viewership measurement body in India, the Broadcast Audience Research Council (BARC) India - a joint industry body set up in line with government guidelines, by an industry that had been seeking a robust and transparent ratings system.

At the Ficci Frames 2016 conclave on Thursday, BARC chief, Partho Dasgupta, said that the body was in the process of measuring all audio and visual content. “We want to do everything together, but it will happen only gradually,” he said.

At the inaugural session of the three-day conclave on March 31, though, Union minister for communication and information technology, Ravi Shanker Prasad had quipped, “Television ranking (rating) must become more fair and responsible. I was not impressed with TAM, I am not impressed by the alternative too (BARC). How can a few thousand boxes determine what India is watching? There must be an improvement here.”

A day later, television industry honchos gathered at a session to discuss just that – how the industry could decode television viewership better in a vast country like India. Shashi Sinha, CEO, IPG Mediabrands, who incidentally, was not present at the inaugural session, had a rejoinder to the scepticism expressed by the minister.

“BARC is acting under TRAI guidelines including the number of meters,” he said during the panel discussion. “While the minister doesn’t approve of any of the measurement systems, the system is formed under his guidelines.” Paritosh Joshi, CEO, India TV, who was moderating the session, had opened the discussion by seeking Sinha’s opinion of the current ratings system.

“I think this effort has been wonderful,” said the IPG Mediabrands chief. “The global fraternity has complemented it more than the Indian fraternity. The change that we speak of was not going through an overnight transformation. It was to set a roadmap for the years to come. And I think in the last one year, BARC has done a great job.”

“Indeed there has been a mismatch in the expectations,” opined Sinha, before veering into the subject of the volatility of the medium. The CEO of BARC said, “Does anybody spend their evening the same way every day of the year? No. Similarly, when it comes to measuring data, things will change every day. Both from the supply and demand side. This is the new normal.”

“There are occasions when things are not constant. I know of niche channels for which there are not much impressions and we had suggested for a four-week average instead of a weekly average,” said Raj Nayak, CEO, Colors, who seemed to take a moderate view on how volatile the medium was. Broadcasters seemed to be at variance on many aspects of the measurement system. Dasgupta referred to “a lot of jumpy notes” and admitted that it was not a good sign.

“It is a sample study and it will have a relative error and you can’t change it. That is the basics of a sample study,” Dasgupta pointed out, sticking up for the way BARC operates. When asked if BARC considered a census on the ratings, Dasgupta did an impromptu opinion poll. He asked members of the audience if they watched Tamil news on television and three hands were raised in response. He then asked the audience if it watched news bulletins in English and suddenly all hands went up.

A member from the audience then raised a question on measuring broadcast and not content. “The problem in this country are two-fold,” said Sinha in response, “one is mind-set and the other is technology. BARC has done watermarking, it allows all kinds of formats and has multiple stakeholders in it. What we are doing is trying to duct tape all of this. To bring in digital measurement, IRS, and maybe other media also. The problem is not technology, it is in aligning the stakeholders and that is difficult.”

Nayak said, “We are content aggregators. We are measuring content viewership and that has happened ever since cable, DTH and in today’s digital era. The only place that is not measured is print media and you can’t mix and match that. Everybody uses a different measurement to their convenience.”

When asked about the ethicality of a broadcaster and whether IBF had consistency, Nayak said, “It’s too early. This is a beast medium and the stakes are too high.” He emphasized the need for a body like Indian Media Foundation where BARC does everything.

While the panel mostly discussed vigilance, there was an opinion that half the story in measuring audience ratings was deterrence. Dasgupta explained how BARC took care of deterrence when it was measuring data.

A team is set up within BARC to quarantine abnormal behaviour among sample households and individuals. When the team has enough data, it suspends ratings for the household in question for six months. While the body is still overcoming a lot of problems at the backend, efforts are being made to achieve the best for all stakeholders, he said.

The BARC will soon be launching a research project with Nielsen, which will have an enormously large sample size. The ‘Broadcast India’ research project will study 3,00,000 television viewing homes, of which only 20,000 will be representative homes for measuring ratings every year. The report will come out soon and will be in public domain. Sinha said he was sure that the report would have a significant impact.

While the panelists were in concurrence about the many problems with the measuring body, which after all, was still at the nascent stage, the discussion concluded on a positive note. Nayak said, “As broadcasters want granular data so that they can fine tune content. The rankings or ratings should be classified into FTA and pay channels as the two cannot be compared.”

Nayak spoke of maximizing revenue in smaller cities as data was now available for rural and urban India. He sounded sanguine about growing revenues from the advertisers on the rural front. As things evolved, broadcasters would too, he said.

At one point, Joshi asked Hitesh Chawla, CEO, Silverpush, how his outfit functioned. Silverpush is a digital measurement startup, which tracks digital activity. Chawla, who was on the panel, said, “We currently monitor advertisements on the digital platform and are getting closer to monitoring content.”