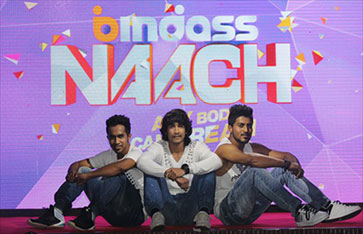 Following the box-office success, Disney India is now looking to build on its ABCD (Any Body Can Dance) franchises by adapting it into a reality TV series on its youth-centric Hindi entertainment channel Bindass. Titled ‘Bindaas Naach’, the weekly show goes on air from August 16, 2015 at 7.00 pm.

Riding on the ABCD wave, ‘Bindass Naach’ is a journey of three young men – Shantanu, Macedon, and Nimit, as together they pursue their passion for dance and follow a collective dream of proving themselves at a world stage. The show has been produced by BBC Worldwide. The trio will themselves pick four other dancers to form the team of Desi Hoppers that will perform at the World of Dance tour in Los Angeles.

It may be noted here that the entire show has been filmed in advance and the Desi Hoppers will perform on the same day when ‘Bindass Naach’ launches.

Commenting on the digital marketing activities for the show, Vijay Subramaniam, VP and Head - Content and Communication - Media Networks, Disney India, said, “For the very first time, ‘Bindass Naach’ is going to have social integration into the story. So at points in times of conflict you are actually going to time the messaging. And if you go onto social media at that point, you'll see Shantanu posing a question to you and when he does that, your post will appear on our social media feeds. That helps in creating real time interaction with the story.”

Myleeta Aga, Senior VP & General Manager India and Content Head Asia, BBC Worldwide, added here, “This is really the kind of cutting edge craft that you see in more mature TV markets, where social media are completely integrated into each other.”

Talking about other interactive marketing stratigies, Subramaniam said, “The other thing that is going to happen is the video blog. We have tied up with Facebook, which is going to set up special vans for us. We premiere on Sunday and repeat all the way to Friday, and on Friday, we make the announcement at the end of every episode that if people want to chat with three guys, they can do so through the video bogs that will be covered live. We have 10 episodes so, you can interact for 30 minutes every Friday.”

“We’ve kept the ethos of the story intact and delivered really fun, interesting engagements for the consumers. In terms of community, ‘Bindass on the go’ on Snap Chat will start from Sunday. We are going to do something very interesting using Periscope, which allows us to live stream,” Subramaniam added.

Speaking on the on-air and on-ground promotions, Subramaniam further said, “As far the network is concerned, over 3,000-odd promos have gone on air. What is interesting is that when we did these (events) we had over a lakh people turning up. We had Friendship Day celebrations, we’ll be having a ‘freedom dance’ on Independence Day.”

When asked why Bindass is using only the digital platform to market ‘Bindass Naach’, Subramaniam replied, “Well, honestly for us, content is marketing. Our strength is in giving great content and if adapted in the right environment and placed at their convenience in the right manner, with the right level of interactivity, the content becomes marketing itself.”

According to Aga, “Young audiences don’t really want direct marketing. They want to see the stuff that is happening. So, the best way to talk to them is by engaging them on the content level. Whereas in a GEC show you might have a bunch of hoardings, not for what is but it looks glamorous as it has a star, but with the youth that isn’t enough. You have to give them stories.”

“‘Bindass Naach’ is a mix of real dream put within the construct of a real series and the layering of digital on top of it, that’s never been done before,” Aga added.