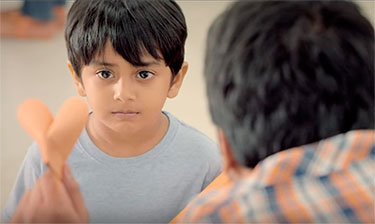 Hypermarket chain Big Bazaar has set out to leverage the festive season through relevant, emotive and impactful communication. The festive season is the time when Indians are most generous and are open to accepting new, positive changes. This presented a perfect opportunity for the brand to reinforce its ethos and strike a chord with millions of Indians.

With the intent of keeping its promise to make India beautiful, Big Bazaar initiated communication targeted towards bringing positive changes in people’s lives with the ‘Shubh Shuruaat’ campaign. Introduced during this year’s Ganapati festival, this integrated campaign kick-started with a two minute long anthem specially composed by the famous music director- duo, Salim-Suleiman. The anthem ran as a multi-lingual radio campaign that wished listeners a ‘Shubh Shuruaat’ in all walks of their life.

At the advent of Diwali celebrations, Big Bazaar is back with an extension to the ‘Shubh Shuruaat’ campaign with the ‘Paper Patakha’ ad film by DDB Mudra West. Themed along the idea of giving consumers an opportunity to have a ‘Shubh Shuruaat’, the ‘Paper Patakha’ ad film shows a Big Bazaar staff member introducing the ‘Paper Patakha’ to a kid, who passes on the idea and popularizes it as the new ‘Patakha’. The idea of a better and cleaner Diwali using ‘Paper Patakha’, soon spreads and is adopted by many. Led by a TVC, this concept is being amplified through radio, print, outdoor, digital media and in-store activations. Quirky events like ‘Longest ladi corporate challenge’ and ‘Paper Patakha on the streets of India’ are being planned across the country to spread the thought.

Commenting on the campaign, Sadashiv Nayak, CEO, Big Bazaar, said, “Big Bazaar stands for its inclusiveness and its commitment to making India beautiful. At the same time, we are a brand that is constantly innovating. Our new commercial takes our brand ethos forward and proposes an interesting idea of a ‘Paper Patakha' Diwali. It is insightful yet simple and entertaining at the same time. It is about this idea of a paper Patakha that a kid picks up at the Big Bazaar store and how it catches on among people. We hope this marks the Shubh Shuruaat of Making India even more beautiful.”

The concept of the new ‘Patakha’ and the film have already garnered appreciation among consumers with more than 4 lakh views and 37, 000 clicks on HotStar itself after the ad film’s exclusive premiere on the app. The film has also received more than close to 3 lakh views on YouTube along with numerous conversations about #PaperPatakha on Twitter and Facebook.

Sonal Dabral, Chairman and CCO, DDB Mudra Group, said, “It has been really exciting to work on the latest 'Paper Patakha' campaign for Big Bazaar, which in its own way is working towards ‘Making India Beautiful’. Not just crackers, brands too create a lot of noise during Diwali with their high decibel advertising. 'Paper Patakha’ consciously keeps away from adding to the noise. Paper Patakhas are part of everyone's childhood. With the simple message that it gives out, and with the joy with which it delivers it, I'm sure 'Paper Patakha' will be loved and shared by the audience. Here’s wishing everyone a beautiful, pollution free Diwali.”