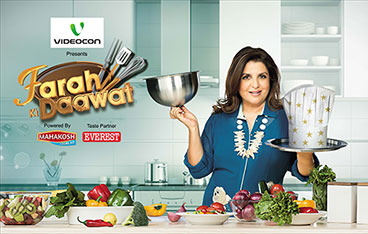 Colors has recently announced the launch of its new show, ‘Farah Ki Daawat’, which goes on air from February 22, 2015. To be aired every Sunday at 8 pm, the show will have celebrities such as Abhishek Bachchan, Alia Bhatt, Shah Rukh Khan, Yuvraj Singh, Kapil Sharma, Malaika Arora Khan, Sania Mirza and Karan Johar, among others, share their secret recipes.

‘Videocon presents Farah Ki Daawat’ is a cooking-based chat show, which will delve into multiple elements of the lives of celebrities encompassing their food journeys, quirks, secrets and guilty food pleasures. Every episode will provide an exclusive glimpse into some celebrity kitchen to pull out a recipe which brings comfort to the favourite stars from their hectic schedules.

Commenting on the show, Raj Nayak, CEO, Colors, said, “Food has become such an integral part of our lives. At Colors, we are taking this thought forward with Videocon presents ‘Farah Ki Daawat’ to bring to viewers the ultimate cooking-based television offering that will provide an uninhibited glimpse into the kitchens of some of the most respected personalities in the country. The show is a perfect addition to our bouquet of offerings for our advertisers, marketers and viewers, while furthering our proposition of showcasing content that enables cohesive viewing thereby making Colors a one-stop entertainment destination catering to their every need. We are happy to join hands with Videocon who have come on-board as the presenting sponsors for the show to collectively further our brand promise while reaching out to a larger audience base.”

Elaborating further on the show, Manisha Sharma, Programming Head, Colors, said, “The first thought on our minds when we wake up is ‘What should I have for breakfast?’ Food is a critical element of our lives and with ‘Farah Ki Daawat’, that is something that we are attempting to bring to the forefront. Unknown to many, Farah Khan is a complete foodie at heart and her food journey on-screen and off-screen makes her an unprecedented culinary voice in entertainment. Her knowledge in the kitchen is extraordinary and we hope her wealth of experience in food transforms into delectable food items in not only her, but also the viewers’ kitchens. Be it by cooking it up with Farah Khan or diving hands first into a bowl of memories that translate into lip-smacking dishes, the show showcases some authentic dishes that promise to be a visual and tasty treat for the viewers’ senses.”

Speaking about her new stint on television, Farah Khan said, “I love cooking because it is quite calming and therapeutic. And by virtue of being a complete foodie, I also love feeding the people around me. But, as they say, a lot can happen over food. Through ‘Farah Ki Daawat’, I hope to bring out the different traits of celebrities, which viewers have only wondered about. Be it about the food that is cooked in their kitchens, or their own secret recipes about their favourite dishes, ‘Farah Ki Daawat’ will be all about good food and unadulterated entertainment.”

For ‘Farah Ki Daawat’, Colors has roped in a volley of sponsors, including presenting sponsors Videocon, powered by sponsor Mahakosh Cooking Oil, taste partner Everest Masala and associate sponsors Kenstar. The channel has also devised an extensive marketing and digital promotion strategy to further amplify the reach and impact of the show that engages mediums such as print, radio, television, OOH and social media platforms.

Speaking about their association with the show, CM Singh, COO, Videocon, said, “Videocon is a leading player in the home appliances segment and is known for offering technologically advanced solutions to its customers across categories. With our association with ‘Farah Ki Dawat’, we wish to have the same outlook in promoting quality entertainment to the viewers. The show is a perfect platform for us to showcase our diverse product line to our stakeholders. Further, the show will also enable us to reach out to a larger audience base and share our knowledge and expertise with them.”