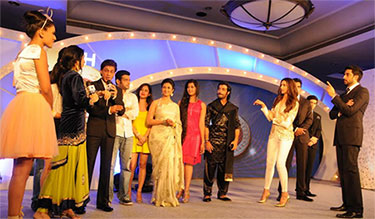 ‘Saas Bahu Aur Saazish’ (SBS), the most popular show on ABP News celebrated its tenth anniversary on October 18, and revealed a new identity at a star-studded event at Telebrations, which took place at ITC Grand Maratha.

Ashok Venkatramani, CEO, MCCS India, said, “‘Saas Bahu Aur Saazish’ is a program which has become a household name among Indian women. 10 years back when we started it, the idea was to report all the crucial happenings of soap operas which, at that time, were beginning to engulf the Indian audience. Today, with the new identity launch, we are looking forward to becoming sharper in our reporting and reach out to our SBS family. On the 10th year of Telebrations, we would like to thank the entire entertainment industry, our viewers and partners who have been supportive throughout. We look forward to providing entertaining content, along with keeping the values of reporting alive."

For the record, SBS is an afternoon prime-time show aired on weekdays between 2.30 - 3.30 PM daily. It is a pioneering show on ABP News that provides nuggets about TV stars, captures all the excitement and news of popular serials across channels and the television world. SBS Telebrations is the program wherein the channel celebrated the 10th anniversary of the show.