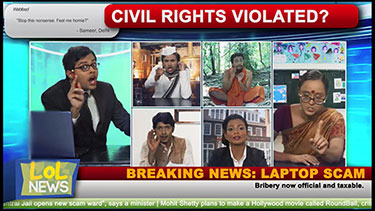 Pepsi MTV Indies, the new channel from Viacom 18 which was launched in February this year, and focuses on alternative music, film, art, street culture and fashion, has come out with a new marketing campaign. The channel has rolled out a multi-media disruptive campaign aptly named ‘Step Up. Discover’ in four different content genres through a series of tongue-in-cheek videos to break the monotony.

These quirky and fun films belong to the four ambits of news, daily shows, reality shows and Bollywood item numbers. They encourage viewers to explore the world of the Indie sub-culture while consuming mainstream content. Striking a strong connect with the youth, the campaign conveys the basic ethos of Pepsi MTV Indies, i.e., offering newer, fresher content to the evolving audience.

In addition to promoting the campaign on television, there is a heavy skew towards digital which also includes web and mobile. The campaign also extends to hangouts, multiplex, radio, nightlife and large-scale college activations.

Excited about the disruptive marketing campaign, Sumeli Chatterjee, Head – Marketing & Insights, MTV and Pepsi MTV Indies, said, “The audience is curious to think beyond the routine content and explore the new talent across music, films and comedy. Mainstream has become formulae driven, routine is boring, and MTV is stubborn about killing the boring. ‘Step up. Discover’ is not just a campaign line, it is also the brand philosophy that will guide programming on the channel. Pepsi MTV Indies will enable the viewers to discover the pulsating Indie sub-culture. A world that is independent, earnest, honest and extremely talented. Stepping away from convention, this campaign has been co-created with a collective of Independent musicians, lyricists and film-makers to stay true to the spirit of this movement.”

The campaign takes a satirical look at the repetitiveness of the content across screens – television and digital. It actually nudges the audience to think beyond the routine of saas-bahu melodrama, overhyped news-room debates, loud item numbers and formulae driven reality shows. The videos might look funny, but each of them has a deep seated message which provokes the viewers to sample a new world of independent, brave and fresh content at Pepsi MTV Indies.

Chatterjee explained, “The campaign is built on principles of micro-targeting. In true Indie style, this campaign intercepts the audience as they are consuming their routine content. Because, that is exactly the time the viewer is open to discovering more in the same genre. Example if you are watching news updates and are yawning between the cacophonies of debates, that’s when you are likely to run into the newsroom commercial of ‘StepUp. Discover.’”

MTV Indies has co-created the campaign with a set of creative minds who believe in the lifestyle the platform propagates. The music of the ad has been composed by Raxit Tewari and the lyrics have been written and sung by Vishvesh Krishnamoorthy, vocalist for Scribe and director of MTV’s Bring on the Night as well as Dewarists.

Tapping into this pulsating, dynamic and fresh subculture, the Pepsi MTV Indies is designed to bring together the vibrant potential of Indian youth. The channel’s programming includes mood based user generated playlists, artists busking on the streets of India, indie‘pedia’ which brings in news of the happenings in the indie world, stories from amazing world that exists backstage, insights into iconic album art, showcasing unusual suspects, graffiti art, bespoke automobile designing and avant garde fashion.