Lay’s brings its biggest global campaign ever to India 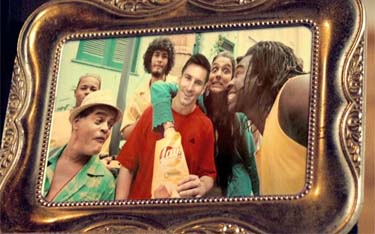 Lay’s brings its biggest global campaign ever to India

PepsiCo’s Global Snacks Group is launching its biggest worldwide integrated marketing campaign ever. The campaign will feature international football superstar, Leo Messi, on millions of Lay's packages, including 50 million bags in India, as part of a multi-dimensional effort that includes television advertising, and out-of-home, digital, in-store and point-of-sale executions.

This global campaign, created by TIEMPO BBDO, Barcelona, which will be executed across more than 60 countries, is a direct result of PepsiCo’s ability to leverage its size and scale to improve the impact and efficiencies of local advertising to tell equity-building brand stories on a mass scale.

Lay’s will be bringing forward the global campaign with Messi in India, beginning with a master brand commercial that will be aired on YouTube starting June 12, 2014. Lay’s will also be activating a Mega Consumer Engagement programme led by three new flavours called ‘Football Favorites’, that kick off with a television commercial starting June 20, 2014. These new flavours, along with core flavours of Lay’s, will provide soccer fans a larger-than-life opportunity to watch Messi play live! Consumers have to taste all the flavours, and vote for their favorite one to stand a chance to win. Fans in India should look for these specially marked Lay’s packages with this promotion over the June-September period.

The master brand commercial and centerpiece of the campaign ‘Messi Photo’ was shot over the course of three days in Rio De Janeiro, Brazil, and Barcelona, Spain. With the great taste of Lay’s potato chips at the centre, the commercial builds off the insight that people enjoy pinching a Lay’s chip whenever they are near one. ‘Messi Photo’ shows that not even a world-class footballer can avoid his fans’ fingers.

“We are proud to deliver the first-ever global equity integrated marketing campaign for Lay’s using the universally beloved game of football as our backdrop,” said Lorraine Chow Hansen, President, PepsiCo Global Snacks Group. “As a leading macro snack brand around the world, Lay’s now has a fantastic programme that will maximise our brand message throughout globe.”

Messi will also appear in a commercial for Pepsi and Lay’s – PepsiCo’s two global flagship brands that are both activating football programmes in 2014.The commercial is the biggest global marketing initiative to feature both Pepsi and Lay’s products, and with football as a driver of awareness for PepsiCo’s food and beverage brands around the world, this campaign reflects PepsiCo’s broader strategy to combine the power of global brands, showcasing them better, together.

“Pepsi and Lay’s are two powerhouse global brands from PepsiCo, and football, with millions of passionate fans around the world, provides a tremendous platform to showcase how they can be enjoyed better, together,” said Chow Hansen.

“We know that a refreshing Pepsi and satisfying Lay’s snack is the perfect pairing during many occasions in life and both are enjoyed together by fans across the globe,” she added.