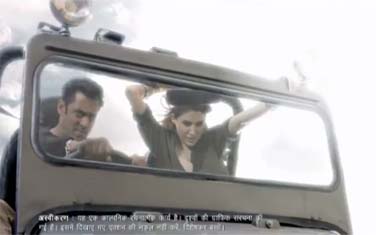 India’s iconic soft drink brand, Thums Up, is back with a thunderous campaign to kick-start the year, featuring Bollywood’s own toofani superstar Salman Khan. With characteristic oomph and chutzpah, the latest campaign reminds consumers to push boundaries, pave their own path and unleash the potential within, with the tagline “Toofan to sab keanderhai, bas dhakkan hi to hatanahai”. This clarion call is a further build on the drink’s iconic and much celebrated brand philosophy of ‘Live Like Thunder’.

Conceptualised by Leo Burnett India, the TVC has been created by KV Sridhar, Chief Creative Officer - India Sub-continent, and Sainath Saraban, Executive Creative Director. The TVC has been directed by Julien Troussellier under the Cutting Edge Pictures production banner.

Southern superstar Mahesh Babu features in the south version of the campaign.

Speaking about his experience as Thums Up brand ambassador Salman Khan said, “I am excited to be part of the next leg of the toofani Thums Up campaign. This time, the toofan is even more electrifying! I completely identify with Thums Up’s new campaign thought – asking people to unleash the potential within them – bas dhakkan hi toh hatana hai. Thums Up stands for this inherent potential which is within each of us. It’s about self-transformation, finding your true calling and unleashing one’s inner potential.”

The campaign rolled out on March 14, 2014. As part of the launch, Thums Up previewed the TVC among Salman's fan base of more 20 million (14 million Facebook fans + 6 million Twitter followers), on March 13. Thums Up has a robust digital plan to leverage the campaign. This includes digital and social media platforms for targeted genres: social, video on demand (VOD), search, travel, games, reach portals and mobile. The campaign will be amplified through a 360-degree integrated communication plan.

Debabrata Mukherjee, VP – Marketing, Coca-Cola India, said, “Ek Toofan Khatam to Doosra Shuru. In continuation of our toofani philosophy, Thums Up is back with its thunderous campaign ‘Toofan to sab ke ander hai, bas dhakkan hi toh hatana hai’. The campaign builds the Thums Up philosophy of inspiring today’s youth to recognise their inner potential and unlock the Thunder within. We are constantly trying to push boundaries to bring this message to our consumers and this year, we are setting the bar higher. The compelling visual narration portrays Salman unleashing the thunder within, for his bottle of Thums Up.”

Commenting on the film, KV Sridhar said, “The new campaign embodies the values of being adventurous and the ability to go beyond one’s limit. The idea behind this whole approach was to convey that a true Thums Up drinker will go to all possible heights to experience the energetic and energisng taste of Thums Up. In the TVC, Salman Khan shows the extent to which he can go for his Thums Up by achieving the impossible.”

In line with the theme of the 2014 campaign, Thums Up will soon be rolling out its extremely popular rural marketing initiative, ‘Thums Up Toofani Jalsa’ in the states of Odisha, Bihar, UP, West Bengal, Maharashtra, Haryana and in Rajhmundhary. This initiative, running nationally in its fifth year now, is a unique consumer engagement initiative, allowing Thums Up to connect and engage with its loyalists, giving them the opportunity to participate in and experience an evening of great entertainment and action. Thums Up Jalsa is one of the company’s  largest consumer connect initiative for rural India and the response and encouragement that it has got from consumers over the years has helped to make the event larger, better and more entertaining with every passing year.