It involves six dailies: Hindustan Times, Hindustan, ABP, The Telegraph, The Hindu and The Hindu Tamil. On offer: a combo media plan that can talk to the entire nation. Target: TOI? BestMediaInfo speaks to industry leaders 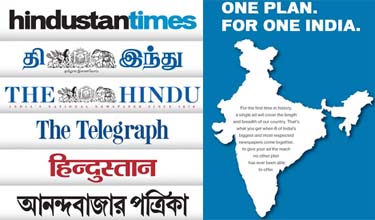 It involves six dailies: Hindustan Times, Hindustan, ABP, The Telegraph, The Hindu and The Hindu Tamil. On offer: a combo media plan that can talk to the entire nation. Target: TOI? BestMediaInfo speaks to industry leaders

A new front has opened in the battle for the print ad pie. Six leading newspapers belonging to three major media houses have joined hands to start OneIndia, a combined space selling platform for display ads on a national level. It is being touted as the “perfect way to write a media plan that talks to the entire nation”.

The initiative by HT, ABP and The Hindu includes three leading English dailies – Hindustan Times, The Hindu and The Telegraph – and three regional papers –Anandabazar Patrika, Hindustan, and The Hindu Tamil. Together they cover the four corners of the country.

OneIndia has also invited others to be a member of the club. An interested publication needs to call the toll-free number 18601080101 or write at contact@1india.biz.

The combined OneIndia platform will give media planners the opportunity to take a combo offer and place display ads in these major newspapers at the same time, at a reduced cost. Those who do not wish to advertise in all the papers will still have the freedom to go for individual ad placements.

A brand will now be able to advertise in different corners of the country at the same time since the newspapers in the OneIndia group are all leaders in their markets and segments. Furthermore, by choosing vernacular press as well as English dailies, the target audience will include a greater and wider reach.

OneIndia, available by invitation to select display advertisers only, offers the unique benefit of a single-platform reach comparable and incremental to television, along with the many clear benefits of print, such as immediacy, impact, comprehension, credibility, and a clutter-free environment, to name a few.

Talking about the key idea behind this alliance, Benoy Roychowdhury, Executive Director, HT Media Ltd., said, “The idea behind OneIndia is to provide an unduplicated reach like never before, along with a single-window service, in order to invite non-print and infrequent print advertisers to experience and profit from the significant benefits of print advertising.”

How does the industry view this move? BestMediaInfo.com spoke to a few experts in media and marketing.

Shashi Sinha, CEO, IPG Mediabrands India, elaborating on the benefits of the OneIndia initiative, said, “For smaller or entry level brands which may not have the financial muscle to advertise on a big scale, this will be very helpful. These brands will get national coverage in one go and across all metros. The initiative will leverage the geographical markets and since their markets don't overlap, it will be a sound business decision as well. It may even be indirectly directed at the Times Group, though it is not being said so. However, the point remains that on its own the initiative will be beneficial, especially for upcoming brands.”

Lloyd Mathias, Director, Green Bean Ventures, said, “Such a strategy is beneficial to marketers for a pan-India reach. Each of these newspapers have a geographical strength, be it The Telegraph or ABP in Bengal and the eastern region, HT in the North, Hindustan in West and North or The Hindu and The Hindu Tamil in the South. Therefore, we can see it as the coming together of geographical dominations which may prevent the domination of a single group. Consumers can still buy specific ads for regions if they so choose. Overall, I feel it is a business driven initiative, not so much a marketer driven one.”

Deba Ghoshal, Head of Marketing and Key Accounts, Voltas, also felt that “this initiative seems like a 'counter TOI' kind of alliance. In the absence of any other formidable metro combo offer, this sounds like a smart, combative initiative. It would be interesting to see which all publications join this alliance in times to come.”

Ghoshal further said, “Depending upon the commercials and flexibility of the combo offer, it could serve as an efficient tool for a pan India brand having presence in the North, East and South. However, it does not break much ground in the West. They would also need a stronger vernacular option for Tamil Nadu (South). For brands having regional priorities or localised presence, this would not be of much use.

Ghoshal suggested that if they “add a few Business Dailies as well, it could get more diverse”.

Sundeep Nagpal, Founder-Director of Stratagem Media, is of the opinion that language newspapers will be big contributors to the success of this initiative. “This will be a sound strategy if they can represent significant value benefits than what the TOI offers,” he added.

Nagpal explained, “Media planners would love to use the combo even without a formal offer like this one. What will happen is that a media planner will also negotiate with individual papers for rates. This coming together would take the effective rate up. The move has been done mainly to fight the competitor and it can also add a lot of volume – more than TOI’s – if they can package it properly. However, if they end up becoming expensive, then it will fall back on them.”

Even as most of the media and marketing experts see this is a smart, workable initiative, they also see this as an attempt to counter the marketing muscle of The Times of India Group. The fight for the ad money is definitely going to turn more interesting hereon.