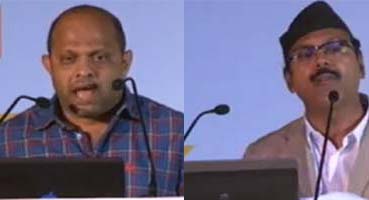 The Ad Club has just turned 60. And to celebrate the milestone, it has decided to re-imagine its popular events starting with the Ad Review. This year's Ad Review, which was held in Delhi on Friday, February 28, 2014, saw Taproot's Agnello Dias and BBDO's Josy Paul taking the stage.

As an event venue, Delhi has gained immense clout over the last few years in terms of the volume of business generated, the high number of blue-chip clients and the sheer growth in size of the agency branches in the Capital.

While reiterating the reasons for choosing Delhi as the venue for the Ad Review, Pratap Bose, President, Ad Club, said, “The two speakers will be talking about what they think of the communication business as it happened last year. Therefore, essentially it will be their points of view on the year gone by. And who better than Josy and Aggie to undertake this review.”

Unlike the usual ad reviews where the best ads of the past year are showcased and discussed, Aggie and Josy decided to liven up the atmosphere by taking turns to highlighting issues and significant trends that they witnessed through the last year. However, they steered clear of ads done by their own agencies and also refrained from ranking the ads which were reviewed.

Aggie took the stage first. He explained the term 'thought consumers' which he saw as an emerging trend. This includes building value which leads to products selling as could be seen in recent examples of HUL and P&G.

"There seems to be a consorted effort by brands around the world to sell a higher common order, a higher common benefit and along with that add value to a brand or a product," he explained.

According to Dias, advertising has changed over the last few years as “thought consumer advertising challenges the ideas and perceptions of family, bonds, politics, etc.” What he also noticed is that people are happier to contribute to a cause and also get product benefit free from it.

In this new phase of advertising, one doesn't just buy into an ad; consumers buy into the brand through that ad. Brand and consumer dialogue which was personal some years ago has now turned into a spectator sport for people who may not even consume the brand.

Dias went on to discuss the importance and responsibility of the social media in the new age of advertising where campaigns can go viral in an instant or be rebuked by the population even before hitting the TV screen.

Josy chose to look at the year differently. Taking the cue from the love and lust hormones – dopomine and oxytocin – he explained how the year gone by was about making relationships and not selling products. “It was the year of oxycotine. The sale was the byproduct of the exercise. Be it the Lifebuoy 'Help a child reach 5' campaign or the Bournvita mother campaign, these all created relationships with the viewers who later became, in some cases, users of the brand,” he said.

According to Josy, another trend that ruled this year was the power of the small idea. A missed call given or a book donated went on to make big changes in the way the country looks at advertising.

"We intellectualise too much where we should be actually acting or executing an idea. Therefore, 2014 may be the year of dopamine. But whatever it is, will be a reaction to all that 2013 was, the year of oxycotin," said Josy.

The evening's final discussion was moderated by Bennett, Coleman & Co.'s Executive President, Rahul Kansal. He brought the two speakers together and engaged them on different aspects of advertising, keeping in mind the trends seen in the year gone by.