The last date for entries is January 31, 2014 and the awards will be presented in Mumbai in March 2014 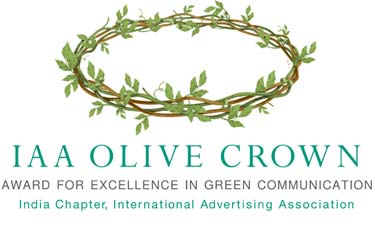 The last date for entries is January 31, 2014 and the awards will be presented in Mumbai in March 2014

The India Chapter of the International Advertising Association (IAA) has announced the call for creative entries for the fourth edition of the IAA Olive Crown Awards. The Olive Crown Awards are India’s first and only awards for creative excellence in communicating sustainability. These green awards have been warmly embraced by the advertising fraternity and have been growing in size and stature over the years.

Last year the Olive Crown Awards were endorsed by the Asian Federation of Advertising Associations (AFAA) and went on to become the first ever pan-Asian event of its kind. AFAA will continue to endorse it this year.

Srinivasan Swamy, Chairman, RK Swamy BBDO and President, India Chapter and VP-Development Asia Pacific, IAA, said, “These awards have acquired the hue of a ‘cause’ and this is one of the reasons for their universal acceptance.”

Parameswaran said, “We cannot put a price on our commitment to Brand Earth and that is why there is no entry fee for this one-of-a-kind award. The quality of entries was very high last year and we are expecting an even better standard this time.”

The last date for entries is January 31, 2014 and the awards will be presented in Mumbai in March 2014. For the third time in succession, 9XM, a popular music channel, will be the presenting sponsor of these awards. Hungama and the Patrika Group are the Green partners.

The entry form can be down loaded from iaaindiachapter.org