New campaign by DDB Mudra creates a kiddie club where children can enjoy benefits, win prizes and have fun 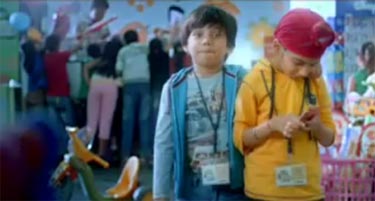 New campaign by DDB Mudra creates a kiddie club where children can enjoy benefits, win prizes and have fun

Big Bazaar has always tried to connect with its audience through various innovative campaigns, be it Wednesday Bazaar which targets women buying household items, or the youth by promoting lines like FBB (Fashion at Big Bazaar). Taking it a step forward, Big Bazaar's newest campaign has been made especially for kids, and surprisingly, made by them as well.

Conceptualised by DDB Mudra West, the campaign is based on a kiddie club, along with a kid's advisory board, to make it more relatable, approachable and fun. Children in the 3-15 years age bracket are no longer just members of the family who are given things without asking. The new generation kids are as much the decision-makers in the family as their parents. Their opinions are kept in mind as the kids have the power to pester their parents to let them buy the products of their choice. Not to mention that kids are more tech savvy than the parental generation and are in most cases atuned to current trends. Big Bazaar wanted to tap into this consumer base. Not just as one that helps make the decision, but also as a target audience with over 7 per cent business catering to them. Big Bazaar wanted to establish itself as a destination for kids' shopping. They made a kiddie club, aimed at reaching around 600,000 kids in its launch phase. Big Bazaar wanted a regular appointment with the kids from the club, thus ensuring repeated footfalls throughout the year.

"We at Big Bazaar recognised that today's kids are very independent and have their own individualistic tastes and preference. Big Bazaar's Kiddie Club recognised their need for independence by involving them in building this campaign. We can say that this is a campaign of the kids, by the kids, for the kids. The idea was to make their shopping experience memorable and fun at our stores based on their definition of fun and memorable experience. I am sure this exclusive membership will make every kid feel special and build a special bond with the brand," said Akshay Mehrotra, Chief Marketing Officer, Big Bazaar.

The idea behind the kiddie club was simple. This would be an exclusive kids club where a child would get his or her own card where they can accumulate points and win prizes. They would also be invited to take part in various fun events. Big Bazaar tied up with Disney for the grand prize, a trip to Hong Kong’s Disneyland. Other assured gifts are Disney Princess Academy passes, Big Bazaar gift vouchers, etc. The challenge has been well executed by DDB Mudra since they decided to stay away from the traditional Big Bazaar campaign tone. The idea was to share with them the mechanism of the club and the various gratifications that the kids can expect, after they become a part of the club. The club was formed after much research by talking to kids.

Sanjay Panday, Sr. VP and Business Head, DDB Mudra, said, "The idea was to 'unlearn' what we knew and 'learn' something new about kids. And what better way than getting the 'kids' to create the idea that they believed would work for their peer group. The exercise was truly enlightening and gave us some sharp insights about how today's kids think and how they have a strong point of view on just about everything. These learnings will help us build a much larger and sustainable agenda for various kids' related properties at Big Bazaar."