Premiering on June 22 at 7 PM, the show travels with Delhi Police to capture real-life crime scenes and investigation and the real world of Delhi’s policemen 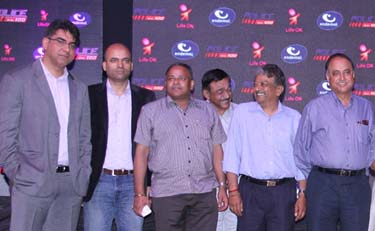 Premiering on June 22 at 7 PM, the show travels with Delhi Police to capture real-life crime scenes and investigation and the real world of Delhi’s policemen

Life OK, India’s fastest growing Hindi general entertainment channel, and Endemol India are all set to launch a new genre-defining show – Police Dial 100 – a fast-paced programme that travels with the Delhi Police to capture real life crimes and investigation. The show premieres on June 22 at 7 PM and will be telecast every Saturday-Sunday at 7 PM and 11 PM.

To launch the show, Life OK organised a screening of the show at Siri Fort Auditorium in Delhi on June 20, 2013 that was attended by Delhi Police Commissioner Neeraj Kumar along with hundreds of senior police officials.

Ajit Thakur, General Manager, Life OK, said, “Police forces have a tough job of maintaining law and order, especially in densely populated Indian cities such as Delhi and Mumbai. Police Dial 100 is Life OK’s effort to delve deeper into the functioning law enforcing agencies and capturing on camera the highly stressful lives our police forces lead. The one-of-its-kind show in India will showcase things that are often not discussed on camera. The series is not based on any script and won’t feature dramatisation or enactments; it will only capture reality as it happens in the police world. We are confident that the audience will be thrilled to see our real life heroes on camera.”

Thakur added that the channel had “not decided on the number of episodes for the show” and hinted that it may continue like its other shows on different social issues. It has shot for 30 days and has a line-up for the next 90 days of shoot.

The show is being promoted during ICC Champions Trophy matches with heavy promotion on network channels. On the launch day, Life OK will have extensive print campaign covering Hindi newspapers across the country.

Deepak Dhar, MD and CEO, Endemol India, said, “Endemol has always broken the mould when it comes to new and innovative programming. For the first time in the history of Indian television we present a show that explores the real world of cops and crime. Our cameras have captured the activities of the police force, working to solve a case in real time. We would like to thank Neeraj Kumar, Commissioner of Police, Delhi, for his cooperation in allowing us to explore the world of crime through the eyes of the police.”

Police Dial 100 will transport viewers into the dark alleys of real-life crime scenes and the investigations that follow – through police’s lens. It brings police, camera and action together for the first time on Indian television to offer viewers a first-hand experience of thrilling live chases and the stark realities of police operations. The series is shot live and showcases ‘Asli Police in Asli Action.’

To begin with, the show will travel with the Delhi Police to scan the streets of the national capital that has attained notoriety for its soaring crime graph. It captures every movement – from the very first call on emergency helpline 100 – to nabbing the perpetrator of the crime. Besides the thrill, the series also envisages highlighting several challenges that our police forces encounter every day. From kidnappings to murders, Police Dial 100 covers a range of cases that the law enforcing agencies tackle routinely. The show will acquaint its viewers with the stressful world of police, their control rooms, the organisational structure, their deep-rooted intelligence network and spontaneous techniques to solve cases.