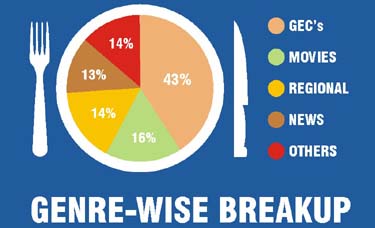 Every third Smartphone user in India uses an Android-based handset to access live entertainment content online while every fifth user prefers a Symbian platform. Blackberry users claim a close third spot, garnering over 17% of the OTT viewership space. Does it mean that the reign of the Symbian Nokia has ended?

These findings and more were thrown up by India’s first ever user-generated data by India’s premier and only OTT (Over-The-Top TV) distribution platform, Ditto TV, an offering from the digital arm of Zee Entertainment Enterprises Limited (ZEEL), Zee New Media.  These findings are collected from over 4,25,000 Ditto users who have downloaded the Ditto TV application to their mobiles, tablets and computers.

Below are a few more findings that indicate the pulse of the smarter Indian public:

While Mumbai retains its frontline position in terms of adoption of new technologies with 16% of the user base, overall the metro circles, with 26% of the total user base, look to be facing stiff competition from states like (rest of) Maharashtra (11%) and even Rajasthan (7%). One can safely assume that its time the metros lose their smugness of being innovators. The markets of Mumbai, Maharashtra and Gujarat together account for nearly 40% of the total user base. Interestingly, the total time spent on the content in Mumbai is double that in Delhi!

Android trumps Symbian in usage too...

Not surprisingly, the maximum usage happens on PCs accounting for 30% of the user base but over 50% of total usage. Android is a close runner up accounting for 25% of overall consumption. Symbian trails with 10% just behind Apple (11%).

The Indian mobile user is not only getting smarter with his gadgets, but also with the content that he chooses to watch. With over 29 channels from across categories, such as GEC, movies, news, sports and music besides Video-On-demand available in the OTT format on devices, a varied mix of preferences was shown by the users.

GECs rule on OTT too! 43% of the total time consumed gets spent on GECs – Zee TV (20%) leads the pack followed by Sony and Sab TV. Movies at 16% are the next preferred choice dominated by Zee Cinema. At 14% of total time consumed, regional channels, largely Zee Marathi are the next most popular choice among ditto users. News garners a very respectable 13%, with Zee News, Zee Business, Aaj Tak and Headlines in close competition.

The story is a little different when we look at user preferences as segregated by their handsets:

With a mobile in every hand, consumers are finding it convenient to carry their live entertainment in their pocket rather than staying glued to their TV screens:

The findings also point the way towards a future wherein users choose service providers who offer cutting-edge technology, thereby indicating the way the Indian telecom industry could be shaping up:

A very discerning Indian public was also very picky with the handset model they chose to watch their favourite content. Samsung cornered nearly 47% of the market with its Galaxy series, in spite of hundreds of Android-based devices in the market today. This trend is significant with the Android platform having recently overtaken the Symbian platform with a share of 42.4 per cent of the Smartphone market. This might also forebode well for the Canadian manufacturer, whose popularity worldwide seems to be dropping.

Vishal Malhotra, Business Head - New Media at Zee Entertainment Enterprises Ltd. elucidating the findings said, “OTT service providers such as Ditto TV are redefining the way consumers are viewing TV today. With people being always on the go, getting the right content to the publics becomes even more important today. The findings of this data sifted from consumers’ mobile TV data usage have implication for stakeholders that go beyond only the content providers. Handset manufacturers will need to take note of why and how their products are being assessed by their customers. Similarly, the service carriers will have to ensure that they have the capability and bandwidth to seamlessly support such services. The biggest beneficiary of this study remains the Consumer since his tastes and preferences will now have to be considered.”

Does this mean that prime time television will cease to exist? While this is not imminent, Ditto TV usage patterns bring to light what the urban, mobile Indian consumer is increasingly looking for to meet his infotainment needs when on the go. This report, to be followed by a quarterly publication of such user trends, is welcome in a space where no similar findings currently exist. With the burgeoning Indian mobile population increasingly warming up to OTT content, advertisers and media planners might want to redesign their strategies to focus their attention on consumers who seem to be moving away from traditional TV viewing.