'You'll come back for it', assures Volkswagen

Continuing with its unorthodox advertising, VW expects to increase footfalls in its showroom with the new TVC created by DDB Mudra 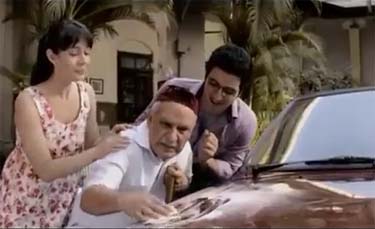 ‘You’ll come back for it’, assures Volkswagen

Continuing with its unorthodox advertising, the German carmaker expects to increase footfalls in its showroom with the new TVC created by DDB Mudra

Steering away from conventional forms of advertising, Volkswagen has become a force to reckon with when it comes to innovative and ground-breaking communication ideas. The German carmaker is back with a new campaign. The new TV commercial, developed by DDB Mudra, aims to drive traffic to Volkswagen showrooms.

While the last VW commercial was a tale of a non-assertive customer disguised as a female and ape in his efforts to recheck the offers on the car, the new TVC revolves around the Parsee community.

Talking about the objective of the campaign, Lutz Kothe, Head of Marketing & PR, Volkswagen India, said, “The new Volkswagen Polo and Vento campaign creates curiosity with the target to get prospective customers directly to the showroom. This also makes it different to other campaigns.”

Shedding light on the rationale behind a ‘Parsee’ setup as the theme of the film, Kothe added, “Parsees are known for their love for cars and would never attempt to sell it at any cost.  It’s a trait in them that they would come back for their cars.”

The TVC opens in the house of a middle-aged Parsee cleaning his car, with his son standing next to him. While the man is completely soaked in his love for the machine, suddenly he notices a crow flying above his car. As a reflex action, the man catches the crow droppings in his coffee mug to prevent his car becoming dirty! The next two scenes also show similar situations with the man trying to prevent any stain on his car, even when he grows old. Finally, the film takes a natural progression with the son now driving the new version of the car, along with his new-born son and wife. As he speeds the car on the road, a mud splash lands on his windscreen that leads to a revelation -- his father being reincarnated as his son. The background than appears, “The Polo. You’ll come back for it.”

The 40-second film has been directed by Johan Gulbranson and the production house is Nomad Films.

After this campaign, the next activity planned at the brand level is the launch of the new Touareg as the flagship model of Volkswagen. “This car line is expected to underline the innovative approach of the brand,” averred Kothe.

Kothe declined to share the ad spend earmarked for the campaign, but informed that the brand will be experiencing a strong movement from “classical communication to digital communication”.