The Hindu hits back at TOI with its new campaign 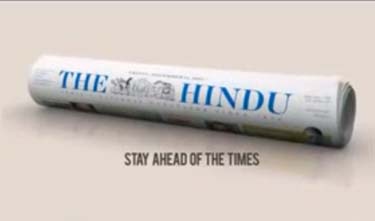 The Hindu hits back at TOI with its new campaign

Two brands taking pot shots at each other, directly or indirectly, is nothing new in advertising. Many brands have done it in the past, such s Rin v/s Tide or Audi v/s BMW. The latest one to do so is English daily The Hindu taking on The Times of India in Chennai.

It all started in November last year, when TOI challenged the leadership position of The Hindu in the Chennai market with its ‘Wake up!’ campaign. Designed by Taproot India, the campaign provoked readers to give away the newspaper that supplied boring news to them and instead switch to TOI.

Now, The Hindu has chosen the positioning ‘Stay ahead of the times’ to hit back. Crafted by Ogilvy & Mather, the three TVCs have used the format of ‘vox pops’, i.e., voice of the people in interview format used in broadcasting. The agency found this sort of candid camera approach an interesting way to deviate from the tried and tested means and existing storytelling formats.

Talking about the genesis of the campaign, Joono Simon, Executive Creative Cirector, O&M, said, “The Hindu has always stood for in-depth, substantive journalism. Though the brand has always been slotted in a well-defined space in the minds of the consumer, there was a need to articulate it sharply, especially in the context of the growing competition. Also, the environment around us is constantly changing as the notion of popular culture is vastly different from what it was a few years ago. All this demanded a fresh interpretation.”

The three TVCs show the lame answers given by the general audiences in reply to simple questions like “What does ATM stand for?” or “Which sport does Dhyanchand play?” While a majority of the people fails to reply correctly to these questions, they promptly revert back with an answer for the last question based on Bollywood. Like “What is the pet name of Hrithik Roshan?” or “Which actress is associated with Size Zero?” The films end with a beeped sound of people responding to “Which newspaper do they read?” implying TOI is the answer.

Clearly, the creative idea behind the campaign exhorts readers to move out of the Page 3 and Bollywood gossip news to relevant current affairs and world events. And for this they need to change their current newspaper – to The Hindu.

Talking about his experience during the making of the campaign, Simon said, “We were really astonished by the level of ignorance among people of general and current affairs. What was more shocking was how some of them were very comfortable with their lack of understanding of things that are important.”

Although the campaign is a direct dig at TOI, Simon rules that out saying, “It is not a direct take on any newspaper. It is substantive journalism v/s what is generally termed as pulp fiction.”

Giving his perspective about the campaign, Suresh Srinivasan, Vice-President, Advertising, The Hindu Group, said, “The basic thought behind the campaign is that in an ever globalising economy where knowledge is power, there is a tendency with media companies to shy away from national and international issues. While in the short term this is of benefit in terms of readership, in the long term it takes a toll on readers who end up knowing nothing about important issues. This was a concern and stance that we had taken.”

Simon also describes the campaign as challenging in terms of execution as it took more than a week for them to complete the project. Interestingly, the films that were largely shot around Mumbai, and featured many people who were “street casted” keeping in mind a pan-India representation.