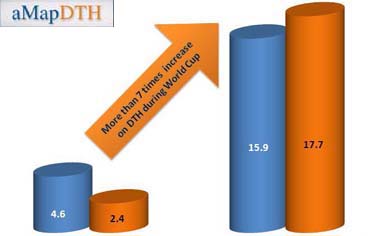 According to the findings of the analysis, easier availability & better quality of viewing lures DTH audiences on to the World Cup. Aggressive marketing efforts by DTH providers coupled with the strength of the DTH platform enables easier access for viewers. In the run-up to the ICC World Cup 2011, the study finds that reach for the World Cup channels has been improving more on DTH than Analog (see the chart below).

Comparing the reach of world cup matches across DTH and Analog platforms, the study finds that the reach for India Matches are slightly higher on DTH vis-a-vis Analog, whereas Reach for Non-India matches are 26% higher. Access increases consumption of cricket on DTH, with viewers not only watching India but Non India matches as well. (see the chart below).