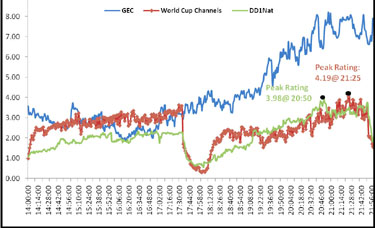 Little seems changed in the GEC market as the world cup took a flying start last week. There were speculations that World Cup will have the adverse affect on the ratings of GEC, but the viewership data from aMap has washed away all those speculations. Except India’s match, that too partly, no other match has affected the viewership of GECs.

As per aMap numbers, viewership of General Entertainment Channels has not got affected much on the days post the opening match (19th Feb,2011) as compared to the average of last 4 similar days of the week. However, the market share of the top GEC channels experienced a 15% drop on the day of the opening match (India Vs Bangladesh).

The above graph depicts the GEC trend when India played and on the days of the non India matches. As there are no regular soaps/serials on a weekend, the audiences tuned into the match broadcast channels and hence the depicted drop in GECs on 19th Feb,2011. On the contrary, people choose to watch their daily serials over the WC matches especially when India is not a part of the game.

The world Cup Fiasco began with an encounter featuring India against Bangladesh and the sweet revenge followed in the form of Sehwag and Kohli's batting , the audience was equally thrilled in the first innings when sehwag was on loose , Indians were glued to their TV sets as for both DD National & ESPN Star Channels

In comparison with the GEC’s, in the 1st innings, the audience was focused towards the match which saw Sehwag’s blistering batting .For both DD and the ESPN STAR broadcast channels, the viewership was high and consistent during the first inning. As the 2nd inning began it was certain that India was on a winning streak so the excitement level pushed down a little and the viewers shifted their focus to GEC’s along with cricket.