Except India-South Africa match, DTH had more share than Analog throughout the World Cup. 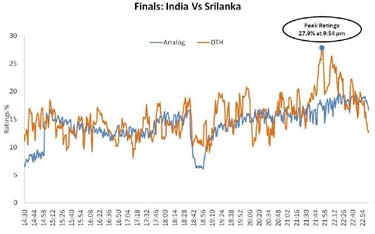 Except India-South Africa match, DTH had more share than Analog throughout the World Cup.

According to the latest study on viewership pattern by aMapDTH, the World Cup channels continuously kept performing better on DTH platforms in comparison to the Analog (cable). The World Cup final match between India-Sri Lanka has also seen higher ratings on DTH than Analog. The match has garnered the highest ratings of the tournament at 16.3 points across the World Cup channels.

Not only this, DTH subscribers in metros have given thumps up to the finals with higher tune in as well as time spent compared to All India.

The peak ratings for final touched at 27.9 points in the metros on DTH which is again much higher than 20.3 points for India-Pakistan match.

The main reason behind the high viewership is believed to be the loyalty of DTH subscribers who followed each match with better time spent on the match channels.

Before the Quarter Finals, the league matches of India average out to be 6.4 on DTH platform whereas on analog it averaged out to 5.1