His strong conviction in the philosophy- ‘Companies don’t need employees, they need self starter entrepreneurs’, set the ball rolling for him. 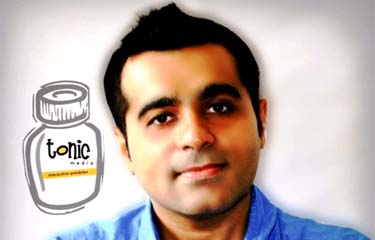 His strong conviction in the philosophy- ‘Companies don’t need employees, they need self starter entrepreneurs’, set the ball rolling for him.

The mere idea of rescuing to quick pocket money options to a nearest coffee joint or video library is one to which we could easily relate in our teens. But for Chetan Asher, 32, CEO of Tonic Media it had been a serious stuff then (and even now!). As right after conquering the heaps of books during his school and college, this young lad sans aspiring crowd landed in a mushy job of a content writer in a web portal. Not resting for long, soon, he moved on to Mobile and Telecom Division of Indiatimes. But as they say- ‘thirsty souls quench for more’, thus  after spending a few years of his carrier in Indiatimes, he realized the urge to move out of the comfort zone and try his shots at new things in the quest to achieve as he defines -‘bigger’ and ‘better’ things in life.  That is when he rolled out his own digital marketing firm named “Tonic Media” in 2005.

And cut to 2011, what started as a one Umbrella Company has mushroomed into three branches with the recent being a sister concern of Tonic Media in the name of Tonic Buzz-the first social media dedicated agency in India. Not only this, the agency has also established its footprints in the foreign land of North America and is also planning to expand further.

But then the only question that wagers our mind at this point of time is: a) aren’t there too many fishes floating in the world of digital media? B) What novice his agency or rather his ‘tonic’ provides to the clients? To which Chetan replies, “The only reason I opted going for opening a digital marketing firm is my interest for the Internet and Digital Medium. I feel there are always new roads which we need to head in order to explore the unknown; an approach with which one can achieve growth and satisfaction. The industry has a lot to offer to people who want to explore the opportunities and I only made the most of it and striving for more.”

But then the boggling passion and an overdose of interest is not enough for the survival in the cat-eat-cat world of cut-throat competition among agencies. And like others, Chetan too had his own share of hardships initially. “I think for a businessman Struggles and Challenges are always part and parcel of life and he should learn to deal with it efficiently. In the initial stages we had a challenge to create a space for our agency in the market. Now when we have made it a new challenge of going global with the same brand,” he exclaims with a dash of confidence in his tone backed by an experience of 11 years in the industry to fall back. Having said that he still reminisces the most challenging project faced by him and his team till date. It was a project bowled to him in his early days that they had to accomplish for an OTC (Over the Counter) Product, where the herculean task was to was to educate the client about the medium making him familiar with the pros and cons of Digital Marketing and then finally to convince him to spend part of advertising budget on this medium. “We had to face lot of challenges but we managed to crack a good deal and also delivered more than what was expected. After that there was no turning back and now clients are realizing the importance of the digital domain in a never before manner”, gushes Chetan.

Surprisingly on a personal front, although an internet savy person, Chetan still gets excited with the thought of digging into books during his free time.  A perfectionist to the core in nature, Chetan understands the knick-knacks of the industry he operates in and is quite optimistic about the future road-map of it as he echoes, “The industry is growing at good rate and also now people are being open to invest good amount of money from their advertising budget in the digital medium. However in order to make full use of the digital space, advertisers need to move out of the CPC (Cost per Click) and CPM (Cost per Mille/Impressions) models and starts using the Potential of the medium to its fullest. This is what the industry lacks at present.”

His latest work- Mickey Mehta’s “Heal the World” Initiative wherein he propelled a social cause on facebook fan page, took everything by storm with as much as 38,747 fans till now.  And next on his agenda is to start up his own publishing network for advertisers and elevate his agency to the next level i.e. to register it as an integrated digital marketing agency in the market in order to provide a holistic solution to its clients. Well said, but please don’t forget to replenish your dose of ‘Tonic’!