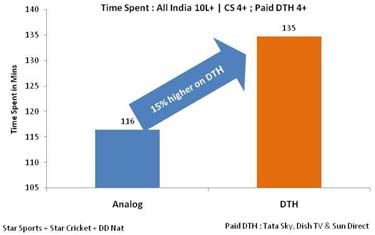 As the entire world awaits for the super sensational World Cup semifinal between India and Pakistan tomorrow which is all set to break all the previous TRPs records, DTH operators have a big reason to cheer for. A study by overnight television rating agency Audience Map suggests that DTH has been able to deliver better result in terms of TRP, reach and time spent for the match channels.

The India-Australia Quarter Finals was one of the most watched matches of this World Cup; it set the precedent for India becoming a top contender for picking up the Cup. The excitement was evident as the ratings skyrocketed to 9.9 on DTH as compared to 7.3 in Analog Homes on aMap people meter.

Only “time” will tell how the India-Pakistan semis will fare. Likewise India-Australia match, BestMediaInfo.com will bring real time ratings for India-Pakistan match tomorrow. Watch the space.