Videocon innovates on the zero paisa per second campaign – cracks open an egg to unveil Zero, the mascot. 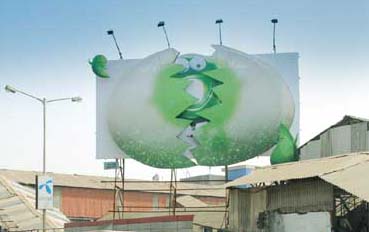 Videocon innovates on the zero paisa per second campaign – cracks open an egg to unveil Zero, the mascot.

This has to be ‘The Teaser’ of the year. On the 2nd of February, the people of Mumbai saw an ‘Egg’ on the Dadar Flyover at Tulsi Pipe Road. It was nothing but the egg, a quirkily exotic egg, which got people wondering about what its purpose was.

Next day they saw a life taking shape in the egg – a faint green little thing, a hint of life now showing in the erstwhile lifeless shape. By this time, Facebook was abuzz with people guessing what this ‘green thing’ could be. On the 4th day, green became more prominent and the egg started cracking open too. People were tweeting, asking others what this could be. 5th day dawned with the egg cracking open a little more and

commuters finally got a glimpse of a cute green icon behind. There were SMSes doing the rounds that said since the Chouw-Mouw are present, it was in all probability a Videocon campaign. On the 6th day, the reveal happened – Videocon Mobile Phones launched a one-of-a- kind Zero paisa per second offer.

Videocon Mobile Phones (UDCL), in association with Videocon Mobile Services (VTL) has launched a massive advertising campaign envisaging the birth of a new offer mascot, ZERO for its revolutionary ‘ZERO paisa per second’ plan. The campaign focuses on the arrival of the radical Next Generation tariff rate in mobile telephony. Thus, the campaign celebrates the birth of ZERO as the new hero for consumers. The innovative offering allows consumers a chance to talk free at ‘Zero Paisa Per Second’, for a period of up to one year.

This unique teaser was executed by Streetsmart, the OOH agency that handles UDCL. Commenting on this campaign Ravi Ambrose, Senior VP, Streetsmart, said, “The TVC for this innovative product had a teaser too, but for the Outdoor medium, we felt that the egg innovation will create the right buzz for the birth of Zero paisa per second. We thought that an egg was the immediate imagery of birth that springs to one’s mind. We coincided the OOH teaser with the TVC teaser. The Zero paisa reveal happened the same day.”

Anshul Punhani, Head Marketing, Videocon Mobile Phones observes, “We wanted to create a buzz around the birth of first-time ever innovative calling plan of ZERO paisa per second. The entire thought of the egg cracking open to reveal the character Zero was very unique. We understood that there were huge difficulties in executing this innovation. The elaborate cutouts had to be changed every night. We congratulate the Streetsmart team for pulling it off without a single glitch.”

Sunil Tandon, Chief Marketing Officer, Videocon Mobile Services said, “I congratulate Videocon Mobile Phones for conceiving the birth of the radical zero paisa tariff and what better way to introduce it than to make a story around it. The egg cracking campaign built curiosity and anticipation and finally achieved registration in the minds of people.”

The campaign is already a rage in the social media space where people have put photos clicked by them on facebook, tweeted their guesses and now emails called the egg story are doing the rounds. It’s a great start for innovations in 2011.