On reaching the landmark circulation of 2 lakh and becoming capital’s No.3 English daily in 3 years, Marketing & Circulation Head speaks on plans ahead. 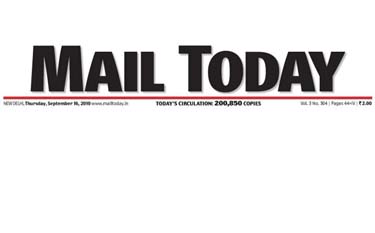 On reaching the landmark circulation of 2 lakh and becoming capital’s No.3 English daily in 3 years, Marketing and Circulation Head of Mail Today speaks in length on daily’s plan.

Mail Today - the compact daily from the stable of India Today group launched in 2007 in Delhi has touched the circulation figure of two lakh copies. According to the recent IRS, the paper is the no.3 English Daily of Delhi with AIR of 2,03,000. To know what it takes to reach at this point and what are the further plans, Rajat Arora of BestMediaInfo.com got hold of Devesh Rai, Head, Marketing and Circulation, Mail Today. Read the complete interview:

Q) At the very outset, congratulations for reaching another landmark circulation of 2 lakh copies within 3 years of your launch. What would you say on this?

For any daily reaching the circulation of 2 lakh copies is a milestone in itself that too within three years of its launch. The paper is largely the second newspaper in the households and the no.3 English daily in Delhi. So this indicates our potential. Good content, when combined with aggressive marketing, was bound for success.

Q) A couple of months back Mail Today ran a campaign positioning itself as new paper for new Indian. How much did it contribute in your readership?

Our readership has jumped in SEC-A. We’ve added huge numbers in past few months and that was all because of that campaign. The paper is quickly expanding and reaching its target group. We’ve always positioned ourselves as Newspaper for new world and with this we’ll be reaching to the most developed section of the society and the affluent class.

Q) What sort of promotional campaigns have you planned to mark this achievement?

We plan to run trade campaign, which will talk about the circulation and readership achievements of the daily. The campaign is targeted at trade as well as readers. For trade, we have launched a campaign with a few trade media and have some ground level activities planned for September 16 and 17.

After Diwali, we plan to launch a brand campaign, which will be based on the core brand and product values of the daily. For brand campaign we’ll be extensively using radio, outdoor media and ground activities.

Q) What advantage does Mail Today provide to its advertisers?

The target audience of Mail Today comprises males and females belonging to SEC A, aged 25-40 years. This section of society has potential of buying and has the maximum disposable income. Mail Today caters to a particular section of society which has maximum purchasing power. If you look at our readership numbers, most of the readers are from the plush areas of Delhi. An advertiser can reach their target audience by riding on our medium without spending oodles of money. The right TG is picking us and we are reaching the homes with the relevant audience for our advertisers.

Q) Since its launch Mail today has been running various subscription schemes. Now when you are almost three year old and have circulation of 2 lakh copies, can the paper be sold without any subscription drives, just like other newspapers?

Of course, the paper can. But the subscription drives are profitable both for the readers and the newspapers. The reader gets the paper with assured gift by spending very little money and the paper tie in readers for periods as long as two years through lucrative subscription schemes. And another very important point is that Mail Today is the second newspaper in the household so being in that position we have to run these subscriptions drives to be connected to our reader base. Even papers like HT and TOI also run these drives from time to time so there’s nothing wrong in providing your readers the best value.  Being the youngest daily in Delhi we have still have to cement our position and subscription drives largely help in doing in that.

Q) Are there any plans to launch any other edition?

We are contemplating but it won’t be correct to reveal at this moment. But in early next year we’ll be going out of Delhi.

Q) What is the future of tabloids in India?

Mail Today is not a tabloid like The Sun or News of The Week. We are a newspaper in a compact form. Internationally, if you look papers like The Guardian and NewYork Times also went compact. The Guardian made itself compact in 2004. We are a compact paper with serious news content.

Q) Recently many papers have started focusing on NCR region by launching the Noida editions and Gurgaon Editions. Is Mail Today working on the same lines?

Despite being a single edition, Mail today is a national newspaper. We don’t focus on local news like sewage problems and RWA issues. We are paper with a national appeal as we pick up issues majorly of national concern. A reader from Mumbai will also not alienate himself from the paper by calling it a typically Delhi paper. Editorially, we carry issues of national concern and we have news from all part of India and world. So what is relevant for whole country is all also for Noida and Gurgaon. Currently we are not planning local editions.

Q) What next for the paper?