The channel shared that the previous season of 100 Mania garnered a reach of 2.9 million and 3.5 million impressions across the Network’s social media platforms 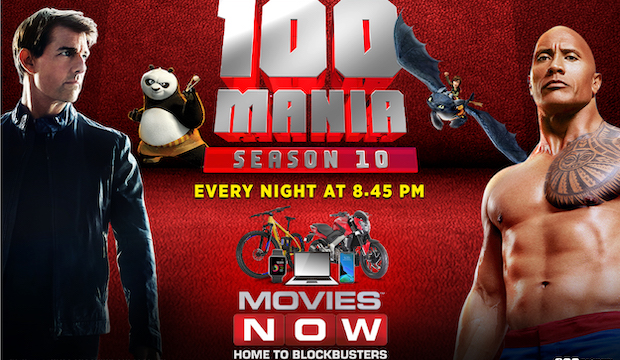 Movies Now has launched Season 10 of its mega property 100 Mania.

100 Mania Season 10 leads with the premise #DoubleDelight, where viewers can win daily prizes by watching Hollywood movies every night at 8.45 pm on Movies Now.

The channel said that through the course of 9 seasons, 100 Mania has witnessed organic consumer engagement, registering active viewer participation with 2.6 million calls, and has gratified 900 winners across the country to date.

The channel further shared that the previous season of 100 Mania garnered a reach of 2.9 million and 3.5 million impressions across the Network’s social media platforms.

With a selection of 100 Hollywood movies for 100 days, 100 Mania offers its viewers an opportunity to win prizes like smartwatches, smartphones, bikes, tablets, cycles, backpacks and much more, by answering simple questions.

To enter the contest, viewers will have Whatsapp the code displayed every night during the 8:45 movie at the number ‘9160001049’ flashing on their TV screen. Following this, viewers will receive the question of the day and should answer the questions correctly to win exciting gifts.

100 Mania will feature some of the biggest Hollywood action blockbusters including The Scorpion King, Alien Vs Predator, Battleship, Mission Impossible, Warcraft, The Wrath of Men, The Last Witch Hunter, The Virtuoso, How to Train Your Dragon among others.