Colors Gujarati to present line-up of superhit movies in 2023 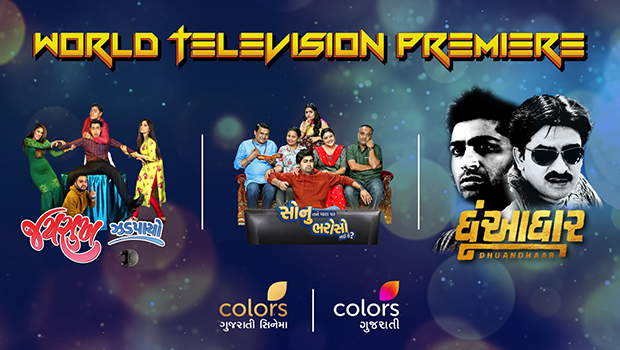 With films from across genres - including action, romance, drama - the curated line-up will offer something to satiate the entertainment needs of every cinephile.

Jayshuk Jadpayo is comedy movie. This is the story of a guy name Jaysukh, whose father has left tremendous amount of debt on him, while he is single earning person, and he must repay back his father’s debt. Jaysukh comes to Ahmedabad city and gets a job in firm; he falls in love with Jigna his co-worker. And from here story takes new turn. Why Jaysukh’s boss fires him and how he will be going solves these problems, is the fun, entertaining story of the movie.

Sonu Tane Mara Par Bharosho Nao Ke is the story of a middle-class family which buys a LCD TV from Chor Bazar but unfortunately the TV doesn't start. So, Kartik tries to repair the TV and when he opens it, he ﬁnds Gold Coins in it. The vicious circle starts when Kartik handovers the gold to police for 10% commission and the smuggler reaches Kartik's house and then the story is about how hilarious that ride of a family how they handle the situation.

Dhunvadhar is a thriller movie where everything changes for Aarav when he gets involved in a road accident. One wrong decision takes him on a journey darker than his wildest dreams. Loved by a caring father, pampered by a loyal friend, and chased by a vigilant cop, will Aarav be able to find redemption?

The movie line-up will be promoted on home channel and the channel will also explore promotions via reach and engagement activities through digital media. Audience will get to interact with the lead casts as well as through social media pages of the channel.