Media, technology and citizens can come together to improve road safety, Union Minister Nitin Gadkari said at the Summit 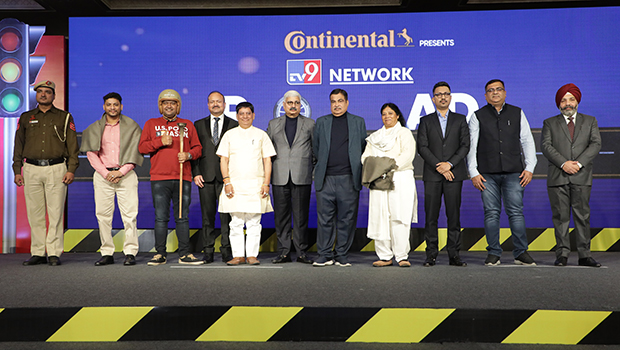 The summit was organised on Monday at Taj Palace in New Delhi and it saw the participation of several personalities from all walks of life.

Nitin Gadkari, Union Minister for Road Transport and Highways, shared his advocacy for road safety at the TV9 Network Road to Safety Summit.

“We need changes in road and automobile engineering to ensure road safety. Moreover, emergency handling infrastructure can also mitigate the effects of road accidents. From helicopter availability to airlift accident victims in critical cases, to ambulances equipped with metal cutters for road accidents in remote areas, we are focused on emergency care,” the minister said. “The media can play a critical role in educating people about the dangers of flouting road safety rules,” he added.

The Minister also said that his ministry has invited celebrities from the film industry and sports personalities to generate citizen awareness around road safety.

Apart from technological intervention, people must value their lives. Citizens should abide by lane driving rules and avoid mobile usage, Gadkari said, while asking the media to keep a close watch on his ministry’s work.

TV9 Network has been working with various stakeholders in the road transport sector through various social cause initiatives like Suraksha Bandhan and Highway Heroes, and recognition series like Leaders of Road Transport Awards. Continuing to sharpen its focus on the road transport industry, TV9 Network is now all geared to spotlight the larger cause of road safety.

More and more Indians have assumed ownership of two and four-wheelers with a boom in the automobile sector. At the same time, the country’s road network has spread far and wide allowing unmatched mobility to millions of Indians. While the growth is laudable, it brings its own set of problems, especially accidents in the absence of enforcement, low awareness among riders and motorists and occasional non-compliance.

Barun Das, Managing Director and Chief Executive Officer, TV9 Network, said, “Our country is embracing momentous mobility but, on the downside, there’s a spectre of fatalities on roads. The present transport system has shortened the distances but also increased life risks. India accounts for the highest number of road accidents globally. I agree with Mr Nitin Gadkari when he says road fatalities are a bigger epidemic than COVID-19. We must shed the number 1 tag of the most road accident fatalities in the world, despite having the lowest motor density.” “As the fourth estate, we can take it upon ourselves to inform and involve 1.4 billion Indians in realising the minister’s vision,” he added. The TV9 Network Road to Safety Summit, supported by Continental Tires, is just the beginning and there’s a long way to cover in ensuring road safety, Das added.

Samir Gupta, Head of Central Region, BA Tires APAC, MD, Continental Tires India, said, “A country’s transport system is the backbone of its economy. Road transport contributes to 4.5% of India’s GDP. Under Minister for Road Transport and Highways Mr Nitin Gadkari there are two main objectives to policy decisions: logistical efficiency and safe mobility. Continental Tires is aligned with these initiatives. Employing technology in tyres is a big step in increasing the safety aspect of a vehicle in line with our endeavour of Vision Zero: Zero Fatalities. Zero Injuries. Zero Crashes. The summit is just the beginning. My suggestion for road safety is the dictum: Engine on, mobile off.”

Raktim Das, Chief Growth Officer, Digital and Broadcast, TV9 Network, said, “TV9 Network has been at the forefront of highlighting issues that impact the common man. While the government has taken concerted steps to make our roads safe, we believe that as a responsible media house it’s also our duty to mainstream this discourse and make people at large aware. The Road to Safety Summit, presented by Continental Tires, is one such quest.”

Stating that the summit is an attempt to call upon motorists and riders to follow safety norms as responsible citizens, he said, “We intend to seed it within the DNA of each individual to make road safety their primary duty.”

Crusaders including Raghvendra Kumar, popularly known as the Helmet Man of India; Manoj Wadhwa, who led the cause of filling potholes; Doris Francis, the traffic heroine of Ghaziabad; Chandrashekhar Narayan Mohite, who identifies black spots to prevent road accidents, and Sandeep Shahi, Head Constable Delhi Police, Delhi’s helmet cop, were felicitated by Gadkari for devoting their lives to the prime cause of road safety.

TV9 Network instituted the Leaders of Road Transport Awards in June 2022 which recognised business leaders from the sector and, in Surakshabandhan, in August 2022, where health cover was provided to over 10k truck drivers in the country.