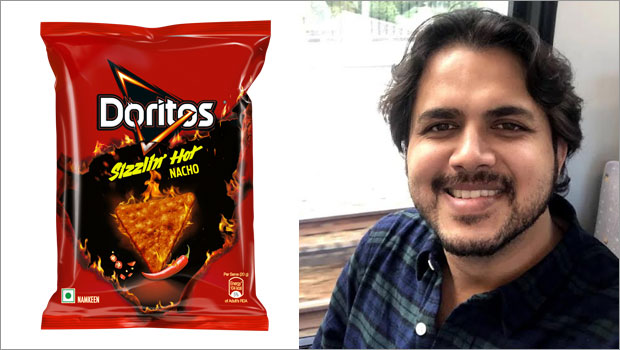 Doritos has launched a fourth flavour, Sizzlin' Hot, in India, as an extended wing of one of the most successful platforms of PepsiCo in the snacking category globally.

“We call it a platform because it exists across brands and is a part of PepsiCo’s global product portfolios under Lay’s, Cheetos, and Doritos as well, where one of its global variants goes by the name of Flamin’ Hot. Owing to its premium nature coupled with our focus area, Doritos has a very strategic role in the product portfolio of PepsiCo India,” said Ankit Agarwal, Associate Director, Brand Marketing, PepsiCo India.

Until now, Doritos was available in three variants- Sweet Chilly, Nachos Cheese and Masala Mayhem in the Indian market. With the new product launch in place, a fourth variant- Doritos Sizzlin’ Hot will also be available across all leading retail and e-commerce platforms in the price cap of Rs 10, Rs 20, Rs 30 and Rs 50.

Commenting as to what led to the inception of the new product offering, Sizzlin’ Hot, Agarwal stated that the brand decided to launch Sizzlin’ Hot in India because of the success of the global variant- Flamin’ Hot and the increasing appetite for ‘chilli’ as a ‘bucket’ in the Indian market.

“Lay's started with it earlier this year and it has been quite a successful journey so far. For Doritos, it is a natural extension to the bolder and flavourful portfolio, hence it just made sense for us to launch a ‘really spicy’ variant as well,” he said.

Agarwal also averred that the USP of Doritos Sizzlin’ Hot is the marriage between the bold and hot flavour with the tooth-crackling crunch.

Throwing light on the flavour constituents and the enticing magic behind the nomenclature of the new product offering, Agarwal emphasised that the product has a high degree of ‘cheese’ at the beginning when one takes a bite of the chip, but then once the cheese coats wear off, the ‘fiery heat’ strikes in and hence justify the name of the product- Sizzlin’ Hot.

In Agarwal’s opinion, the core target audience for Doritos constitutes urban youngsters in the age group of 15-30 years mainly, but the brand love is growing across the country today.

“Doritos Sizzlin’ Hot is particularly targeted towards the younger cohorts of people who savour consuming spicy flavours and are bold enough to taste the ‘fiery heat’ of Sizzlin’ Hot,” he added.

Agarwal also went on to add that the brand had begun creating the pre-buzz for its 360-degree ‘stun-tastic’ campaign on the digital medium, particularly Instagram recently.

The teaser showcases that when the brand ambassador, Kartik Aaryan tries to eat the chip from a box labelled “Not For Kartik Aaryan”, the box is soon taken away from him.

Kartik Aaryan did not get to taste Doritos Sizzlin’ Hot-

“The new commercial, #ChipsNahiFire, features the brand ambassador, Kartik Aaryan, along with a guest appearance from renowned Bollywood Director, Rohit Shetty in the ‘behind-the scenes’ ad film,” he said.

The ad film is a ‘behind the scenes’ take on Rohit Shetty directing Kartik Aaryan in the Doritos Sizzlin’ Hot commercial which is also the first time that the actor was working with the bold-action genre director in front of the camera.

Agarwal added, “Post the pan-India TVC release, we’ll have an entire 360-degree wing comprising of a strong plan for Outdoor and Digital along with TV focussing on how we can tap into all the consumer touchpoints and help them understand the proposition behind Doritos Sizzlin’ Hot,” elaborated Agarwal.

Furthermore, he also went on to add that the upcoming product campaign would be the first Doritos’ campaign that was conceptualised and creatively narrated by Leo Burnett after having won the PepsiCo account in July, this year.

Upon being questioned as to how different was the experience while working with Leo Burnett after a three-decade-long association with Wunderman Thompson, Agarwal replied that both the agencies have some of the finest folks in the industry along with an amazing pool of talent onboard working on the brands.

“We have created magic with Wunderman Thompson and we are sure that we will continue to create magic with Leo Burnett as well,” he said.

Commenting on the line of communication for the launch of Sizzlin’ Hot, Agarwal mentioned that the entire campaign would run across ‘#YehChipsNahiFireHai’ since the new offering is a supremely-hot product.

As part of the brand’s plan for sampling in terms of both traditional and modern trade, Agarwal stated that Doritos is also exploring newer ways of extending the 360-degree media mix to the consumers in a more experiential manner.

“For our retail-level sampling, we understand that the retailers are the generic ‘brand ambassadors’ for any business and hence try to engage with him by showing him the communication plan and allowing him to understand the product and its positioning through sampling as they are the ones who buy in and help us succeed despite having a limited shelf space,” he added.

He also went on to give a glimpse as to how important of a role consumer-level sampling play at PepsiCo, and stated that it is highly crucial for the consumers to have a first-hand experience of the product superiority that the brand brings to the table, which later leads to repeat purchases.

Upon being questioned as to how important is it for Doritos to associate with both on-ground and e-sports events happening in the country, Agarwal replied, “Sports is really big for India and ‘cricket’ happens to be one of the major touchpoints with a massive following along with ‘gaming’ which is growing exponentially in the country. On the global front as well, Doritos focuses on gaming immensely and in India, the journey started with the Call Of Duty promo this year, which helped us to gain a lot of eyeballs.”

“People in India have also started to associate Doritos with ‘gaming’ but there is still a long way to go and we’ll continue to ensure that we at Doritos have a strong foothold in the gaming sector in future as well,” he added.

Furthermore, Agarwal also added that the teaser for Doritos Sizzlin’ Hot also went live during first India vs Bangladesh ODI match and that Doritos would be active and high on cricket during the series as it helps the brand not just create a market splash but also reach out to the target audience in a more targeted manner.

Commenting as to how the pandemic impacted Doritos, Agarwal said that while the entire industry was hit by Covid-19 to a large extent, on the bright side there were a lot of newer consumption patterns like the rise of in-home consumption of snackable items coupled with the rise of Digital mediums.

“Today, the industry is not only bouncing back well but the pre-pandemic trends have begun to resurface,” he added.

When asked whether Doritos Sizzlin’ Hot is an Indianised version of its global Flamin’ Hot variant, Agarwal replied that the two products are very different in taste and spice level.

“Sizzlin’ Hot is one of the hottest flavours one can find in any mainstream brand portfolio as the intent behind it was to make consumers say out loud- ‘God! This is so spicy’,” added Agarwal.

Apart from the newest product on the block for Doritos, PepsiCo had also launched several new variants this year for its other portfolios like Lay’s, Quaker, Kurkure, etc.