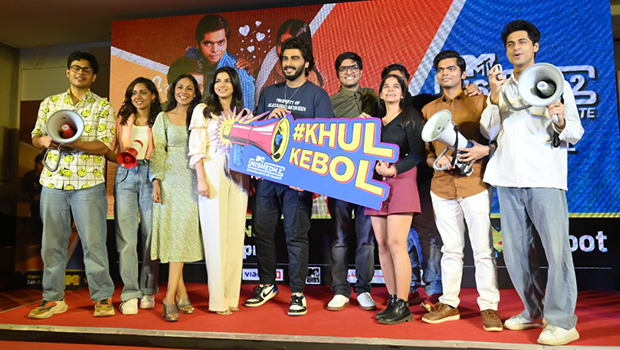 Viacom18 and the MTV Staying Alive Foundation are all set to bring back the behaviour change content campaign, season two of ‘MTV Nishedh’.

The mass-media led intervention with multiple touch points, comprises a 10-episode TV series that fuses hard-hitting storylines with diverse messaging on relationships, sexual reproductive health, contraception usage, approaching abortion as a safe choice when faced with an unplanned pregnancy. It is supported by The David and Lucile Packard Foundation and tuberculosis awareness to promote early testing supported by Johnson & Johnson.

Speaking about the campaign, Anshul Ailawadi, Head – Youth & English Entertainment, Viacom18, said, “We believe that doing good is good for business, and that ethos drives our content choices too. The maiden season of MTV Nishedh performed well with a consolidated viewership of over 11 million and a growing digital following. We are excited to push the boundaries when it comes to content narratives and to shine the spotlight on topics that might be considered taboo.”

Georgia Arnold, Executive Director of MTV Staying Alive Foundation, said, "I’m excited that we’ll be able to reach even more young people, empowering them to make informed choices about the social and health issues they encounter. With partners like Viacom18, it gives the campaign monumental leverage in terms of reach and engagement.”

Cause ambassador and actor Arjun Kapoor said, “It’s important to speak up and break taboos. The youth of today have the spirit and fire to question societal conditioning, they just need a little support and awareness. MTV Nishedh arms them with exactly that, guised in relatable content the show will open up the minds of young India and ensure that they aren’t afraid to #KhulKeBol!”

Sarthak Ranade, Managing Director of Janssen India and South Asia, part of the Pharmaceutical Companies of Johnson & Johnson, said, “Johnson & Johnson continues its fight against TB in India, building on our longstanding work in collaboration with the Government of India, NGOs and other partners. We believe that there is tremendous power in multi-sectorial partnerships to help turn the tide against this devastating disease. Through our partnership with the MTV Staying Alive Foundation on Season 2 of MTV Nishedh, we aim to empower the youth of today to make a real change and champion the cause of a TB-free India.”

Set in the fictional and conservative town of Premnagar, with youth being the primary target audience, the show follows a disruptive filmmaker, a married couple with an unexpected pregnancy and an influencer on the run as they navigate their way through a maze of difficult life choices.

The campaign aims to positively change attitudes and encourages the youth to speak openly about taboo issues.

The series premieres on November 19 and will be aired every Saturday – Sunday at 8 pm on MTV, and anytime on Voot.